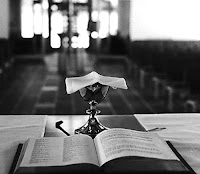 Do you have kids who don't want to go to mass? Do you have a teenager who wants to sleep in on Sunday morning? Do you need an excuse to get your own lazy butt to church? Well, here, without further ado are TOP TEN REASONS FOR GOING TO MASS!!! YEAAAAAA!!!

In all seriousness, mass is the greatest gift that God has given us as crazy as that may sound. Imagine a time and place where Heaven and Earth are united. A time and place where the universal church is united whether you are in Kansas City, London, Rome, India or the Philippines we are all brought together during the liturgy. A time that God infuses you with grace. A place where the created consumes the creator and the consumer becomes the consumed.

Mass is like no other. You don't need any excuses, just go!!