Interactions with the Homeless

I was going to write last week about a picture posted on New York Police Department's Facebook page of a NYPD officer giving boots to a homeless man.   The picture, taken in November by a tourist, shows Officer Lawrence Diprimo giving the pair of boots that he had bought for him after observing that we was walking barefoot on a very cold night.   I was a picture that reminded me part of the the Good Samaritan story and part of the story of Jesus washing the apostles feet. 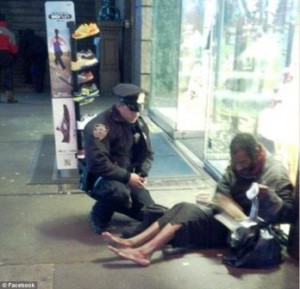 The story really touched me because I work in a part of town that has a large homeless population and so I have had over the last eight years that I've been assigned here a lot of interaction with homeless people.  I've given it a lot of thought over the last week and I don't think I would have done what PO DiPrimo did.  To be totally honest with you---I don't think I would have.

This is something that has always bothered me in that I don't think that I see homeless people the way that Jesus would be happy with.  I don't think that I would have been moved to such compassion to go buy a pair of boots for the man.  The scariest Bible verse to me is when Jesus said, "whatever you do to the least of these, you do unto me" because I'm afraid that I don't have enough compassion or empathy for the homeless people that I do come into contact with.

I think one of the reasons is because of the types of interactions that I have.  The normal interactions I have with the homeless are where they are their own worst enemies.  Ambulance calls where someone is falling down drunk is prevalent, followed by car breaks, assaults to simply waking them up and moving them because they are sleeping someplace they are not welcome.  Often times, the reason they aren't welcome is because of incidents of leaving trash, defecating or thefts.

So it's difficult to have too much compassion for people when the interactions you have are negative.  I will always treat them with respect like I treat everyone with respect.  But it's difficult for me to have empathy for men standing on the stoplight with cardboard signs asking for money when I assume that they are going to use the money for drugs.

This is a difficult subject to write about because I know what Christ is telling me.  I know that I should love as He loves.  But there are life experiences holding me back.  A self protection that prevents me from seeing all of the homeless as innocent victims.  I suppose I could work on this by volunteering to help the homeless--and I have enjoyed helping with St. James Place.  It's a difficult balance---loving without being too naive.  How do you completely love while not completely trusting?  What are your thoughts?

Saturday I woke up and checked my phone for messages.  I had received a text from a friend saying something to the effect that authorities had been called to Arrowhead.   My first thought, still have asleep, was that it was the beginnings of a joke I had heard before---but reading on, it stated that a player had killed his girlfriend and then killed himself in front of coaches.  I got on the web and determined that it was true.  Chiefs linebacker, Jovan Belcher had killed his girlfriend, Kasandra Perkins , who was also the mother of his three month old child, Zoey.

Over the next 24 hours, lots of questions would be raised on how the team and the city would respond to this tragedy.  There were people upset that the Chiefs decided to go ahead and play a game against the Carolina Panthers just 28 hours after the shooting.  People were upset because they felt that Belcher was being made out to be a hero.  People were upset that the Chiefs were going to wear something, such as a patch or a sticker in honor of Belcher or have a moment of silence in his honor.  [Neither of these happened although the Chiefs did have a moment of silence in honor of victims of domestic violence.]

The team---the players and coaches--saying they wanted to play the game says to me that they needed to play the game.   The coaches and the GM were actually there and saw Belcher take his life.  That's something that will stay with them forever.  The players lost a teammate and two friends.  Belcher had played for the Chiefs for four years and Ms Perkins had been active with the Chief's Woman's Organization.  They were family.  I think it was important for them to come together as a team and deal with the loss together.  Because the game was played, they were together in the team hotel that night.  Because the game was played, they had something to occupy their mind.  They were able to make final preparations.  Because the game was played, there was not that void at noon on Sunday.  The game was able to be a valuable distraction and coping mechanism for the team.

I understand that need to make your mind move on after seeing something horrible.  I've been on shootings and homicides scenes.  I have gone on suicides or fatal accident calls.  I've been on scenes where loved ones just did not wake up the next morning and as the sergeant I'm the one who has to tell the family that their loved one has passed.  That sucks.  The thing is----I get to leave.  There is another call after that.  I have seen things that may haunt people for years at the beginning of my shift and have it pushed out of my mind by the end of my shift.  It's the late calls, the ones that come in at the end of your shift and last until you go home that linger.  Those are the one that tend to go home with you and you think about as you try to go to sleep.   So, I understand the players need to play the game and use that as a distraction and a coping mechanism.

Before any of you make an appointment for me to go to our department shrink thinking that I haven't dealt with traumatic things---I'm fine.  There are very few work related things I take home.   I don't live my job when I'm not there.  I have outside things such as family, faith and friends that keep me sane.   And I hope that's the same for the Chiefs players and coaches---I hope they seek the counseling that is being offered to them.

The other thing that bothers me is people making Belcher into something bigger than he was.   Fans should not be posting signs or anything else to praise him. He did murder his girl friend.  That being said . . . people should not be cursing him and calling him names either.   I admit, until yesterday morning I don't recall hearing his name.  All I know of him is the act he committed and what I've read in sort biographies.  But, something went horribly wrong with him.  From what I've read, he was a good man, who loved Ms Perkins.  Something horribly horribly went wrong in his mind for him to repeatedly shoot his child's mother and then to take his own life.  I'm not going to call him evil but there was evil there affecting him.  I think it's best to leave the memories of Ms Perkins and Mr Belcher to friends and family.  Here is a nice recollection of Ms. Perkins from the Kansas City Star.

The rest of need to not get ourselves all riled up and to pray.  Pray for the families.  Pray for the players.  Pray for the Jovan's mom who witnessed the shooting of Ms Perkins.  Pray for the coaches, GM and officers who saw Belcher take his life.  Pray for Baby Zoey.  Pray for all victims of domestic violence and mental illness.  Most of all, pray for the repose of the souls of Kasandra Perkins and Jovan Belcher---may they be in our Father's loving arms.