To Love One Another

At the end of May, I went to my high school class's 25 year reunion.   Like many people, I was not a fan of high school.   It was a very lonely time for me.   I felt like no one cared for me and as if I were invisible.    What I didn't realize at the time is that most high school kids feel the same way---lonely, not cared for and invisible.

I figured that out as I grew older but what I hadn't realized until my high school reunion was really, how closed up in myself I was at that time.    I thought I was a caring person and that everyone else were the jerks.    But, as I talked to classmates who were talking about their memories of high school, I learned how much I did not know.  I didn't know that so and so's parents were going through a divorce or that so and so had gotten pregnant.  I didn't know this or that because I was so worried about why people didn't care about what I had going on in my life. 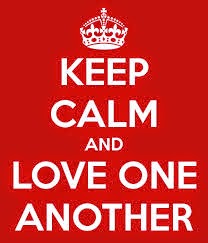 Twenty five years later, and I've matured a little but I think I'm still too wrapped up in my own worries and concerns and I think God is calling me to love others more.    This was realized a couple of weeks ago when I went to the University of Notre Dame for a program for campus and youth ministers called "ND Vision."

This was my second year at ND Vision and I was intrigued as to what God had in store for me.  Last year, He really put me through the wringer and made me feel His love like no other time in my life--no matter how much I tried to resist.   God loves me despite all my faults and despite all my wrongs.   He loves me because it is what He does.

It was made obvious to me in the different sessions.  It was made obvious at confession when I laid all my sins out in front of God and was told that if I worked at my vices of not loving others then the others sins would take care of themselves.   It was made obvious in my solitude.  I went to Notre Dame alone and was made to open up with the other youth ministers who were strangers to me and through the week became my friends.

I wish I came home from Notre Dame a changed person and now loved everyone with a new heart.  The fact of the matter is that it is going to be difficult.   I'm a realist and well, lets face it---some people are jerks---myself included.  Some people make it difficult to love them--myself included.    I also have to be self protective.  I have a line of work where people are trying to harm me so I have to leave up a guard.