It is an Honor

This last weekend was the North Central Regional Competition for the CrossFit games.  Unfortunately, one of my favorite athletes, Stacie Tovar, did not do well and will not be competing at the Games in Carson, California this year.   In the end, I think that the attitude she displayed when she did not win showed what a true champion she is and she proved herself to be a role model for the rest of us.

Probably the main reason I've always cheered for Stacie is because she is from Omaha, Nebraska which is about an hour an a half from where I grew up in northwest Missouri and I've always been one to support my "local" team.  I'm a Royals fan, a Chiefs fan and a Missouri Tiger fan through thick and thin (and lets face it-with those teams there have been more thin than thick)  So, even though I'm in Kansas City now it made sense to cheer for a top athlete from Omaha. 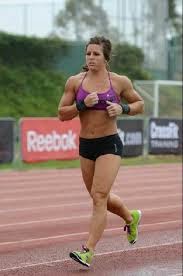 Another reason I root for her is because I remember seeing her in a CrossFit video from probably 7-8 years ago and she was tiny.  She looked like the average female CrossFitter and nothing like the studette she looks like today.  I realized when I watched that video of her working on her push press how many hours and hours she has put into the gym and into her nutrition to get to the level where she is competitive with the world's fittest.

This weekend's performance solidified me as a fan though.  Friday was rough for her and she ended the day in 11th place.   Saturday was a little better but she was way back in 9th place at the end of the day.  She was in tears on the Update show knowing full well that the odds were slim for her making it back to Carson for the sixth year in a row.  I remember thinking, "how does one even come back and compete on Sunday after two days like that?"  It just had to be crushing to know that she would not only not be competing for first place but she would not end up on the podium at the end of the weekend and would not be competing against her friends come July.  How does on even show up the next day?

Show up she did.  On the first workout of Sunday she crushed it and finished first and actually did better than any female on the day in any regional in that workout.  And she was smiling from ear to ear. Then she did well in the second and final workout.  She ended up in sixth place.  It wasn't good enough to put her in the games but it was a great performance and showed a lot of guts.    Her statement to the interviewer when it was all over spoke volumes about who Stacie Tovar is as a person when she said, "it is an honor to compete."

"It is an honor to compete."  It's a simple statement that showed great humility and one that we should carry with us where ever we are in life.  It's basically saying that we should count our blessings.  It's remembering that everything we have and everything we are is a gift from God so appreciate what has been given to us instead of cursing what we don't have.

When I am at the gym and just sucking air after everyone else has already finished the workout --- it is an honor that I am able to be there, that I am physically able to compete when others cannot, that I'm a few minutes from home instead of being in an austere environment like many soldiers and Marines, remember that I'm surrounded by friends cheering me on.  I'm blessed.

When I'm at work and it's been a bad night seeing the underbelly of humanity--it is an honor that I'm put in the position to help others out in their moment of crisis, that I'm allowed to put this badge on, to lead and give direction to a great group of officers and that I'm kept safe throughout the night.  I'm blessed.

When I am at home and I just want to sleep but the kids are keeping me awake or I have tasks to do--it is an honor to be a father and a husband and have the responsibility to raise three children and an honor to be married to my smoking hot wife who I am madly, passionately in love with.  I'm blessed.

So, thank-you Stacie Tovar for not only entertaining me while I watch you compete.  Thank you for showing me what it means to never give up.  Thank you for reminding me how honored I truly am.