I've been a fan of the Kansas City Royals ever since I was a little kid. Some of my fondest memories growing up involved the Royals. Whether it was traveling to Kansas City with my Uncle Mick to catch a game at then Royals Stadium or listening to Denny Matthews broadcasting a game while sitting next to my grandpa. I can remember when the Royals won the World Series in 1985.

Those fond memories seem like a lifetime ago. That 1985 World Series was the last time my Royals even made the playoffs. Since then, there has been a lot of let downs and a lot of bad teams. The Royals have floundered in the cellar only occasionally finishing the season over .500. 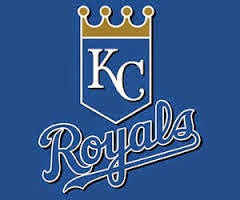 It doesn't matter how bad the team is, I've always supported them. I've flirted with the idea of switching allegiances but who would I cheer for? The St. Louis Cardinals? I'd rather eat a bowl full of razor blades. The Minnesota Twins? Nice team with great fans but too far away. Besides, I feel that I owe loyalty to the team for no other reason than because of my Grandpa and my Uncle Mick.

And every winter I always get drawn back. They would make trades and signings and I would think to myself that “maybe they will be a little better this year.” Of course I would also be disappointed when their best players would leave after a few years for more money and better opportunities.

This year has been different though. The Royals finally seem to have their act together and have been playing meaningful games in September. They've lead the division into September. It's been exciting. Fans have been showing up to the ball park and there is electricity in the air.

But it's been so many years since the Royals have been really good and so many disappointing seasons now that even when they do good I am always waiting for the other shoe to drop. You aren't sure of a win until that last out in the ninth inning. You are always waiting for the next losing streak. And even this year, two weeks before the end of the season I find myself waiting to be disappointed.

I wonder sometimes if God feels the same way about us. Does He sit there getting exciting thinking, “Maybe Jamie is finally getting his act together. His prayer life seems to be coming together. He's been attending daily mass regularly.” Only to be disappointed when my sinful nature rears it's ugly head and I act like I act instead of how I want to act. God wants to cheer us on but does He hold His breath waiting for us to screw up? Does God get frustrated thinking, “Well Jamie isn't in the cellar. He has been hovering at .500 for several years. But it's time to take his game to the next level and make the playoffs.”

Somehow I doubt it. I expect God maintains hope in us. I expect He has faith in us that He has given us the grace that we need in order to succeed. He is our biggest cheerleader. The biggest homer. Expecting us to succeed even when we have given up on ourselves.