The Successor of the Apostles and Obedience 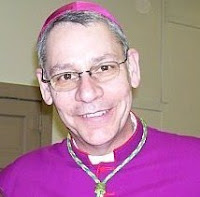 There is no doubt that some of the teachings of the Catholic Church are difficult, especially for someone living in today's society. We are bombarded by so many messages in society that go against catholic teachings. We must recognize the Church for what she is though--the universal church established by Jesus himself with bishops placed in positions of authority to Shepard, guide and teach those who reside in his diocese.
Without that thought in place, it becomes easier to become a "cafeteria Catholic." A "Cafeteria Catholic" is someone who simply picks and chooses what they want to believe as if they were in the line at the cafeteria. Without recognizing the bishops for who they are--the successors of the apostles--it is much more difficult to agree and uphold all of the teachings of the Catholic Church. Jesus knew it would be difficult enough in society and that is exactly why he gave his authority to apostles. That authority did not die with the apostles though. It was passed along in succession with those who came after them.
We here in the Diocese of Kansas City-St. Joseph are blessed to have The Most Rev. Robert Finn as our bishop. Bishop Finn is very orthodox, as most Opus Dei priests happen to be and he really rocked the boat when he came to Kansas City because of his orthodoxy. I would say that it is safe to say that there are catholics in the diocese who are not pleased with Bishop Finn. Personally, I am happy. I am pleased to have him as my bishop because I know that he will be faithful to Catholic teaching.

It is definitely difficult to follow teachings that we do not understand. That is why we must humble ourselves, have trust, faith and be obedient. Maybe it's easiest to simply ponder the words of St. Josemaria:

How difficult it is to live humility! As the popular wisdom of Christianity says, ``Pride dies twenty-four hours after its owner.'' So when you think you're right, against what you are being told by someone who has been given a special grace from God to guide your soul, be sure that you are completely wrong. (The Forge, No. 559)