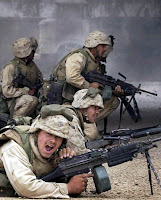 I've also spent the last fourteen years as a police officer--both in Excelsior Springs, MO and for the last twelve years in Kansas City, MO.

Now, I don't want to get into some huge gender argument. Both the Marine Corps and the police department have lots of women and they do wonderful jobs. But lets face it---being a Marine and being a cop is pretty manly. It right up there with firemen, astronauts and bull riders (strike that--I think you have to be part nuts to be a bull rider)

But that isn't what I believe has really made me into a man. I believe what has truly made me into a man has been being a good husband and a good father. I'm sure that there are a million retreats and dozens of different classes or whatever that will tell you exactly this. Obviously, there are men who are not husbands or fathers and I encourage you to pursue whatever vocation God is calling you to. But for the husbands and fathers who are reading this: if you aren't striving to be the best husband and father you can be than you are failing at your manly responsibilities.

I'm sure there is some muscle bound guy out there who is divorced and has no relationship with his kids who is wondering if I'm talking to him and threatening to kick my tail-end. Yeah, yeah---I'll accept that butt-kicking if you look into yourself and decide to do what you have to do to fix that relationship.

It takes huge sacrifices to do manly things. Athletes train long and hard. They have to wake up early. They forgo that pepperoni pizza in order to stay on their diet. A husband has to sacrifice and make compromise in order to keep his wife happy. A dad may have to stay up with a sick kid or give his daughter his ice cream cone when she's dropped hers.

To do manly things means facing your fears. It takes courage to go into combat. It takes nerve to go into a burning building. What about when your teen-age son or daughter is late coming home and they haven't called? Nothing is more scary than seeing your child grow up and start to gain more and more independence.

Sometimes when you manly things all you can do is to cross your fingers and hope for the best. Football players who have battled in the trenches for three hours have to stand on the sidelines as their whole season rests on the foot of a kicker. A dad has to trust in his child. He has to trust that his child has a good solid foundation and will always do the right thing.

My hopes is that at my funeral my wife and my kids will simply say, "He was a good man."