Neither a Liberal nor a Convative be . . . 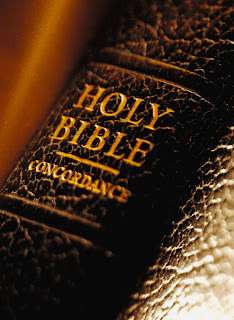 That twist on the line from Shakespeare struck me when I learned from the Twitterverse about The Conservative Bible Project and I thought how sad is it that it's becoming more and more difficult to determine if news is coming from The Onion or not. First President Obama wins The Nobel Peace Prize and now this. Sadly, both of the news items were in fact true.

Now, I consider myself conservative but more than that I consider myself an orthodox Catholic--someone who follows the teachings of the Catholic Church. So re-writing the Bible so that it fits more closely with conservative teachings is just a horrible idea. It just seems crazy to me. The Project is flat out saying that it is trying to translate the Bible so that it has a conservative bias. It goes as far as saying that it wants to remove sections of the Bible to include the Adulteress Story John 7:53-8:11 or removing the first "word" Jesus said from the cross, "Forgive them Father, for they do not know what they do" because they show too much of a liberal bias.

The whole concept really makes my head want to explode because you cannot take the Bible and twist it and change it into whatever you want it to say. Jesus was neither conservative nor liberal. He wasn't Republican or Democrat. He was Jesus. He broke all the molds. That is why the universal church doesn't set up camp on either the left or the right. She is more in the middle. Pro-Life and Anti-Death Penalty. Not for either socialism or capitalism but for a social justice model in which people are free to flourish and the poor are taken care of. She is a green Church realizing that the Earth was placed into our care by God and realizing that hunting is good conservation.

Maybe the one line that really makes my eyeballs pop-out says that the socialistic terminology that permeates through the Bible, "improperly encourages the 'social justice' movement among Christians." WHAT? First--there is a difference between socialism and social justice. Socialism is the government providing the basics of life and no bureaucracy can properly do this. Social justice is us taking care of our fellow humans. Ensuring that they are fed, clothed and have shelter. Ensuring that people have freedom and that there is justice.

Personally, as someone who considers myself a conservative, I am embarrassed by the Conservative Bible Project. As a cop, I figured out a long time a long time ago that in a dispute there is Person A's side, Person B's side and somewhere in the middle is the truth. We should always seek the truth and instead of seeking the full truth it appears that the Conservative Bible Project is trying to make the Bible say what they want it to say. If they are having problems with it then they need to pray on it and ponder where they may be wrong. The Bible is after-all, the inspired Word of God and not the word of conservatives (or liberals).