10. Universality - Catholic means universal and we truly are.  It was once said that the sun never sets on the British Empire.  The same could be said about the Catholic church.  It's all over the world.  We are different ethnicities, different nationalities, different languages, different skin colors, but we are one.

8. Bible - the Word of God given to us by the Holy Spirit by the church.  We don't study it like we should but it's a treasure.  Spend some time reading the gospels tonight.

7. Adoration - my favorite way to prayer and spend time with a friend.  I love spending time in front of the Blessed Sacrament and just talking to Jesus.  Sometimes, I just sit there in His presence.

6. Tradition - We have nearly 2000 years of tradition behind us and because of that, I feel right at home in the church setting.

5. Priests, Nuns and other Religious - I admire our priests, nuns and brothers who give their life to God.  It is a selfless act to dedicate your life to the church and to make a promise of obedience, chastity and in some cases, poverty.  It's a life that isn't meant for everyone but it's a life that should be encouraged.

4. Magisterium - by giving Peter the keys to the kingdom of God Jesus gave authority to Peter and the other apostles.  Today, our pope is the successor to Peter and our bishops the successors to the apostles and they retain that authority.  This is a great gift because we are assured that we will not be led astray by what society tells us may be right.  We are led to truth. 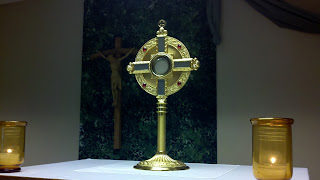 3. Saints - not only is it a good thing to be able to ask the saints in Heaven to intercede for us it is also a great reassurance that life doesn't end when we die or that those in Heaven are not disconnected from us.

2. Confession - a gift given to us that takes humility accept and because of that is often turned away.  The words of absolution are some of the sweetest words your ears will hear.  If you haven't heard them in awhile, perhaps it's time to seek reconciliation.

1.  Eucharist - Jesus made present to us, body, blood, soul and divinity in the appearance of bread and wine.   There is no greater thing than this.

Nineteen years ago, Abby and I were married at the Platte County Courthouse.  (We had our marriage blessed by the church several years later so it IS indeed valid)   Two years ago, I wrote a post titled "Happy Anniversary, Mrs. McAdams" in which I compared our marriage like two puzzle pieces that fit together perfectly even though they appear opposite.  Well, I have to say that in these two years, I have certainly done my best to mess up that puzzle.

You see, I had gotten my priorities messed up for awhile.  I had placed a friendship ahead of my marriage and allowed it to consume my time and energy and neglected my family.  I treasured this friendship and thought it was the friendship I had always wanted.  Interestingly enough--I've always said that Abby wasn't my best friend like a lot of husbands and wives say about their spouse because, in my mind, a spouse was much, much more than just a friend.   Yet, here I was---allowing this friendship to take priority.   It took a swift kick in the back side by Abby and a lot of pain to walk away from this friendship, but it had to be done.

Today, I think our marriage is stronger than ever.   We spend a ton of time together and enjoy every moment.  We make our children shudder in disgust at our intimacy and I've never been happier.   I went through a dark, dark time where I feel like I turned away from God and away from my family for a friendship.  I cannot tell you the embarrassment and the shame I feel for acting like such a fool.    I know that it is because of the grace of God, many prayers, Abby's love for me and that swift kick in the butt that we are as happy as we are today.

Abby, I'm sorry for allowing anyone to come between me and you.  You may have better butt kicking skills--but I STILL love you more.