Negan vs Rick--Who is Worse

My sister, Maggie and I, have been watching AMC's The Walking Dead for several years but this year things seem to be different.   There as been no shortage of action, drama or gratuitous violence just like in years past.   So why do things just seem so blah?

For those who don't watch the show; The Walking Dead is about life in a world where a virus has taken over and changed people to zombies.   The show has centered around Rick Grimes, a former sheriff deputy along with a group of survivors he has joined forces with.   The first couple of years focused mainly on surviving against the zombies--or "Walkers"--along with some interpersonal drama.  Then over the years, they have had skirmishes with other groups with the last several years going against "The Saviors" led by the bat carrying bad guy, Negan.

So, what has made this year different?  Rick's group has been at war with The Saviors since the first episode of this season which means there has been plenty of action.    When the show started, Rick's group were always the good guys.   They were either fighting against the walkers who were trying to kill them or  other groups that were trying to take advantage of them.    That is how Negan and the Saviors started out.   They were a group of bad guys who were trying to take advantage of Rick's group through extortion.   Ricks's group had to scavenge and provide for the Saviors or be punished.  Rick's group has grouped up with other survivors and are fighting back against the Saviors.    In a world where it's every man for himself and where survival is everything, the actions of Rick's groups are not always morally right. 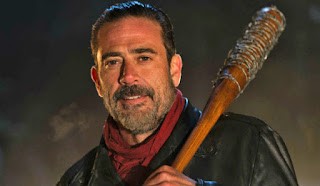 My theory is if the show had followed Negan from the beginning then he, along with the Saviors would be the good guys and Rick's people would all be the bad guys.   That is the problem with The Walking Dead now---it does not seem like there is anyone worth rooting for anymore.  Everyone is a bad guy.

As I was thinking of this, I realized I have seen this thought process in fellow police officers--including myself.    After some time on the job, it is really easy to see everyone as a bad guy and lose all sense of empathy for people.    We continuously scan waistbands for weapons or watch hands because hands will hurt you.    You have to have your guard up because there are people who want to harm you.    It's very easy to become judgmental towards people when you are continuously living in a red or orange zone.

It seems especially difficult working overnights when the most people are home in bed and the majority of people you see are up to no good, drunk or high.   It seems as if everyone is telling you lies.    They will tell you they've only had a couple of drinks when they are falling down drunk.    They will lie about their identity, what they are doing or who shot them.

The cynicism it causes in police is sad.   We start to question everything.   We ask if victims are really victims or are they making up their story.    It's how shooting victim's end up in handcuffs with a K9 walking around their car checking for drugs.

It's a fine line.   Yes, you have to be cautious and watch hands and waistbands.   You can't see everyone as Rick and Negan because if you do, you will miss all of Jerrys and Ezekiels. 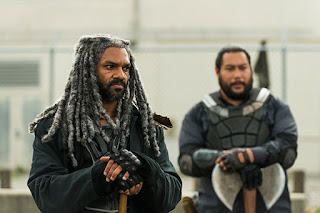