A Step Towards the Diaconate 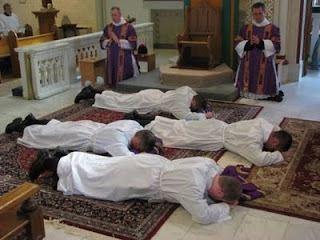 My wife, Abby, and I attended an information/orientation meeting last night on the diaconate. I had already made the decision but this was the first step in making an application to the diaconate. I'm sure you are asking "what in the heck is the diaconate" and "why do you want to be a deacon?"
To put it simply, a deacon is a man who is called to a ministry of service. He serves the community in which he lives in some ministry or another. He may serve the poor or the elderly. A deacon may work in a prison ministering to those who are incarcerated or he may help migrant workers. He has some liturgical roles the primary being proclaiming the gospel at mass. He may give homilies and can witness marriages, officiate at funerals or baptize. But a deacon's primary focus is service. Deacons, who are ordained, can be married (obviously) and normally have regular jobs. There obviously is more to it than that but that is the diaconate in a nutshell.
Why do I be a deacon? I don't know. To be honest, I don't know that I do. Sometimes I have no doubt and other times the idea scares the poop out of me! But the application process in the first of many. The whole process, which takes 4 1/2 years, is a discernment process. One thing that is very reassuring is that the family is involved the whole way. As it was described, you are a man who has two vocations--the married life and the ordained life--but the married life is still your primary vocation. The person who has the ultimate say who is ordained isn't the bishop but it is the spouse.
So, I'm beginning the application process. If I'm accepted, I begin an aspirancy stage which lasts a year. Then there is a 3 1/2 year candidacy stage where the candidates meet once a month at Conception Abby taking college level classes to learn more about their faith.
That's it in a nutshell. I ask all of you for your prayers and that if this is God's will that I follow it.