Living for the Here-And-Now: A Reflection on the 26th Sunday of Ordinary Time 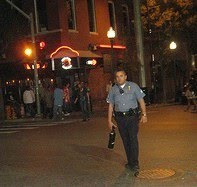 Living for the moment without a care in the world or a worry about what will come. That seems to be the basis for many of my problems at work. The district I work has in it the Westport Entertainment district. In four square blocks there are ten bars (that I can think of) and Lord knows how many bars there are in my sector outside of that four square blocks. To say that I see people living for the moment is an understatement. I see people who are drunk. I see people who are high. I see women dressed in ways that leave NOTHING to the imagination. Every single night, officer's are sent to check on the need for an ambulance where somebody has passed out drunk. Do you know what the test to determine if they need to go to the hospital? If they don't know what year it is. "Excuse me, sir--do you know what year it is?" "errrr---November?" (A secret admission---a person with my sense of humor tends to have fun mocking these people. How I haven't gotten in trouble yet I don't know. Should I take that to the confessional?)
Now, there is obviously nothing wrong with going out and having a good time. Heck, I'm Irish and it's said that an Irishman is never drunk as long as he can hold onto a single blade of grass and not fall off the face of the Earth! But the fact of the matter is, living as if there is no tomorrow can sometimes ensure that there isn't--if you are lucky. I've worked my fair share of fatality accidents where the driver was drunk. I've worked rapes and robberies where the people (victims and suspects) were merely living for the moment. Sadly, I even worked a homicide where the suspects tried robbing a girl for gas money. She tried to drive off and they took a pot-shot at her. So many families were ruined that night because these guys were living for the moment.
We aren't just guilty of living for the moment when we spend a night out at Westport though. We are guilty of it when we spend all of our time working to save for that boat, or nice clothes. We do it when we speak ill of other people in order to make us feel better about ourselves. We do it when we decide to sleep in or go to a football game instead of mass.
It is necessary for us to stop and realize that our actions in this world can have an impact on our souls and on our destiny in the next. St. James points out in our second reading this weekend that "Your wealth has rotted away, your clothes have become moth-eaten, your gold and silver have corroded,and that corrosion will be a testimony against you; it will devour your flesh like a fire." What a point that is. All of our worldly treasures will rot away and be gone when we day. The old saying is "You can't take it with you." So what have you done today to ensure your eternal reward?
Jesus takes it a step further in our gospel reading from the ninth chapter of Mark when He says, "If your hand causes you to sin, cut it off. It is better for you to enter into life maimed than with two hands to go into Gehenna, into the unquenchable fire. And if your foot causes you to sin, cut if off. It is better for you to enter into life crippled than with two feet to be thrown into Gehenna. And if your eye causes you to sin, pluck it out. Better for you to enter into the kingdom of God with one eye than with two eyes to be thrown into Gehenna, where 'their worm does not die, and the fire is not quenched.'" Jesus is warning us. Don't screw up!! Don't do something that will mean eternity in Hell. That girl may be hot and you might have a good time with her but it's better to miss out on that night of debauchery and spend eternity in God's glory.
Isn't it ironic that preaching about fire and brimstone is frowned on today? Isn't it ironic that some say there there is no Hell? Jesus is preaching fire and brimstone and preaching about Hell right here. We don't want to hear that though. We would rather live in the here and now.
The fortunate thing is--even if we HAVE lived in the here-and-now before and not planned for the future--it is never too late. Heck--even if you HAVE planned for your eternal future and then had a night where you lived a night or two in the here-and-now (you know who you are!)--it okay. God forgives you. God loves you so much that he wants you to spend eternity with him--it is what you were made for. Another bit of good news--he doesn't really expect you to cut off your hand. Although your wife may cut off something else off if she finds out so you better stop and get your butt to church!