The Ordination of Women 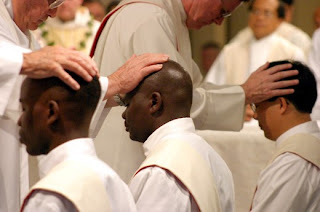 One of the questions my wife asked me when the discussion of me becoming a deacon came about was if a deacon could preside and funerals, witness marriages and baptize why couldn't nuns. I admit--I kind of blew her off because I didn't want to start a debate. So yesterday, she posed this question on her Facebook wall, "Why is it that an institution that sets itself out as the guardian of social justice not allow women to serve in all capacities?" Her questions basically boil down to why doesn't the catholic church ordain women?
I'm afraid my words aren't going to do me justice here but it basically comes down to the fact of the matter that priests are more than just ministers. The priest sits in persona Christi-or in the person of Christ. That is why the priest is able to transform the bread and wine into the body, blood, soul and divinity of Jesus Christ. This is why the priest is able to hear our confession and to absolve us of our sins. He signifies Christ present in front of us so it is only fitting, since Jesus was a man, that man be the symbol of the Bridegroom and a woman is not.
You have to remember that Jesus, himself, picked twelve men to be his apostles. Our bishops today can trace their lineage back to the twelve apostles. For whatever reason, Jesus chose twelve men and the Catholic Church has chosen to follow Christ's example. Some might say that Jesus was only following the social norms of the time. If you think about it though--that argument does not hold water. Jesus did anything but follow social norms. He ate with the tax collector, sat with the Samartian woman, allowed his apostles to do work on the Sabbath and forgave the woman for committing adultery. He had women as his followers--women who stuck with him through it all. He did not pick any women to be his apostles though.
While it is a difficult teaching, you have to remember that the the church does allow women to be in other types of ministerial roles. In fact, the same roles that many protestant churches allows women to minister in the Catholic Church does too. But those protestant churches also don't have anyone perform the rolls that priests perform such as the consecration or absolution. The Catholic Church does not demean woman at all. She has many many female saints. Many of the doctor's of the church are female. The Catholic Church, in fact, places Mary, a female, in very high regard. Catholics are even accused of worshipping Mary (which of course we don't.)
It is also very possible for the Church to practice social justice and still not allow women to be priests. You see, as Michael Tortalani explains in his article titled, "Why No Woman's Ordination" in This Rock magazine, "Justice and equality are not identical. Justice is "giving a person his due" and can be taken either negatively (punishment) or positively (reward). While all persons must be treated "justly," they need not be treated "equally"-if for no other reason than because each has different potential and capabilities. " Mr. Tortalani explains that a student will get a grade that he deserves (justice) but not the same grade as a classmate (equality) Men and women are different and the sacraments aren't a right--they are a gift. Sometimes we have to accept the role that God gives us and not demand it from him.
Finally, one of the easiest ways that I began to understand why women cannot be ordained is this. The sacraments require certain things to make them valid. Baptism requires water and the words, "I baptize you in the name of the Father, of the Son and of the Holy Spirit." If you don't use water or those words then the baptism is not valid. The Eucharist requires unleavened bread and grape wine. If you use Cheese-it's and Welch's then it's not valid. Marriage requires a man and a woman otherwise it's not a valid marriage. Likewise, one of the requirements for Holy Orders is a male.
Male ordination is a hard teaching to understand. The Catholic Church has many difficult teachings but at some point you need to pray for understanding.