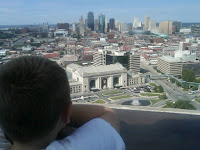 Saturday afternoon, I had a great day with my nine year old son, Max. We went to the Nelson-Atkins Art Museum followed by the Liberty Memorial/World War I Museum. I know that that may not sound exciting for your regular nine-year old boy but Max actually wanted to go. We had gone to the art museum the week before and he wanted to return and he really wanted to go to the top of the Liberty Memorial. The WWI Museum was for me. It was truly a great father-son day.
Sunday morning, we woke up and went to mass for Scout Sunday. Our Cub Scout Pack and corresponding Boy Scout Troop attend the early mass together one Sunday every month. Afterwords we were going to go to the local cafe for breakfast. I wanted to stop at home and change (I didn't feel like going to the diner in my Cub Scout uniform) and pick up my wife before we went. My six year old daughter also wanted to go and there was just no way that I could make her stay at home (my 14 year old daughter was home too) Max got upset and went inside. I found him inside his bedroom crying--upset because he didn't want Molly to come along. I asked him to come but gave him the option of staying at home and he chose to stay at home.
While we were eating, my oldest daughter, Emma called and said that Max had been throwing a total temper tantrum because we had left him at home. I felt bad but at the same time I was upset. He had made his choice and besides--didn't he remember everything that we did just the day before?? Just him and I?? What a short memory he has.

Then it clicked---don't we do that with God? Don't we forget all of the blessings and gifts that he has given us the moment that we don't get what we want? Don't we get angry at God the moment things go bad and wail, "why me??" We pull the mask over our face and forget that everything we do have is a gift from him. Every heartbeat--every breath is a gift from him and yet we have the nerve to be upset at Him when things don't go our way?? Do we seriously get upset at God when we only got 38 presents while our neighbor received 39? Are we showing maturity by throwing temper tantrums.
I learned something else that morning. If I could backtrack--that morning when I woke Max up it was early. Mass started at 730 and we had to be there by 7:10. So to get Max up and going I had promised him that we would go to breakfast--just the two of us. Of course, two hours later I had a change of heart when I realized that I had not been spending time with Molly and invited her. Max was angry because he didn't want Molly to come (they have a sibling rivalry) but he was more upset because I had broken my promise to him. God doesn't break his promises. He has never promised us a rose garden but he has promised us that if we believe and follow Jesus we will spend eternity in Heaven with Him.

I would like to point out that God is omnipresent and doesn't have to cause conflict by having a brother and sister together at breakfast. Lucky dog!