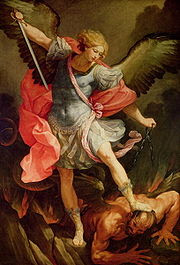 I don't have any tattoos. I don't have any desire to get a tattoo. But if I were to get one, I would have to get two. On my left upper arm, I would get a tattoo of a guardian angel. On my right upper arm, I would get a tattoo of St. Michael. St. Michael is the archangel, whose feast day we celebrate today along with the other archangels--Gabriel and Raphael. St. Michael, who is the patrol saint of all police officers, is my patron saint.
Why is St. Michael the patron saint of police officers? Simply put-because he fought Satan, who was first among all of God's creation before turning against God, and kicked him out of Heaven. In the Book of Revelation it says, "And there was a great battle in heaven, Michael and his angels fought with the dragon, and the dragon and his angels fought back. But he was not strong enough, and they lost their place in heaven." That is essence is what we, as police officers do every day. We go out and fight sin. Think about it. All crime is some form of sin--murder, rape, robbery, assaults, larcenies---they are all forms of sin. Narcotics or drinking may not be a direct sin but believe me--they lead to sin. Every day when police officers put on their badge and gun belt they are warriors in the battle against the Devil. We may not be the best warriors because we are sinners too but that is the Satan fights against us. Sometimes we fall. Nearly every day a police officer is killed in the line of duty. All too often, (although not as often as the news would have you believe) an officer falls to temptation and is found being the criminal. And sadly, sometimes everything that an officer goes through is seemingly too much for him and he takes his own life.
Today is a day to remember St. Michael and to ask him to defend us in battle against Satan. The common prayer to St. Micheal that used to be said after mass (and still can-all you have to do is stay over) is as follows:

Saint Michael the Archangel,
defend us in battle;
be our protection against the wickedness and snares of the devil.

May God rebuke him,
we humbly pray:and do thou,
O Prince of the heavenly host,
by the power of God,
thrust into hell Satan and all the evil spirits
who prowl about the world seeking the ruin of souls.
Amen.

A couple of weeks ago, I received an email from Margaret with this prayer to St. Michael for police officers. Thank you, Margaret.

St. Michael, Heaven's glorious Commissioner of Police, who once so neatly and successfully cleared God's premises of all its undesirables, look kindly and professional eyes on your earthly force. Give us cool heads, stout hearts, hard punches, an uncanny flair for investigation and wise judgment Make us the terror of burglars, the friend of children and law-abiding citizens, kind to strangers, polite to bores, strict with law-breakers and impervious to temptations. You know, St. Michael, from your own experiences with the devil that the policeman's lot on earth is not always a happy one, but your sense of duty that so pleased the Lord, your hard knocks that so surprised the devil, and your angelic self-control gives us inspiration. And when we lay down our night sticks, enrol us in your Heavenly Force, where we will be proud to guard the throne of God as we have been to guard the city of men. Amen