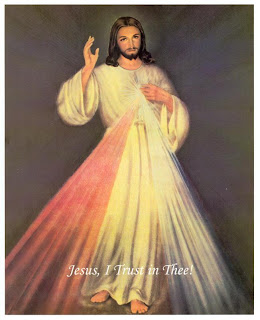 I started reading The Diary of Sister Faustina. Sister Faustina—now St. Faustina-- was a nun in Poland during the 1920’s and 30’s. For a young lady with no education her writings are very spiritual. That makes sense due to the fact that Jesus would appear to her. During one of these visits, Jesus told St. Faustina that He wanted her to have a painting done of Him. In the painting he would be holding up one hand as if giving a blessing and the second hand would be touching his chest. From his chest would be two rays—a red ray denoting His blood which is the “life of souls” and a light blue ray denoting water that makes “souls righteous.” At the bottom of image was to be the line, “Jesus, I trust in you.” He told St. Faustina that He wanted the image to be venerated throughout the world and the second Sunday of Easter to be celebrated as a feast to “Divine Mercy.”
Jesus wanted St. Faustina to let the world know of His endless mercy. In one of the visions, He told St. Faustina, “My mercy is so great that no mind, be it of man or of angel, will be able to fathom it throughout all eternity.”
I think this is important to remember because sometimes the reason that we fail to turn to God is because we fear that what we have done in life is so horrible that He could never forgive us. When we do that, we tend to stray further away and do more harm to ourselves and feel like we could never return to God.
Nothing could be further from the truth though. God wants nothing more than for us to be there with Him. God WANTS to forgive us. But the first step for that forgiveness us for us to turn towards him and ask for it!
So say that God’s mercy is infinite or unfathomable is too deep for our finite minds to image—obviously (that IS what unfathomable means). So let me try to give two imperfect examples. Imagine that one drop of sea water contains enough of God’s mercy to forgive all of the sins of the world from the beginning of time to the end of time. Now imagine that God has enough mercy to fill the oceans of the world---from sea to sea and to the depths of the oceans trenches. He has enough mercy for you. Turn to Him.
Second example—imagine the most evil man in history. You can pick whoever you want but for my example, I’m going to pick Adolf Hitler. He was a bad dude. He was responsible for the deaths and torture of who knows how many people. He was the cause of World War II. When some would think of evil incarnate they would picture Adolf Hitler. I think that most people would assume that he is burning in hell right now. But hold on to your socks because we are told not to judge lest we be judged and here is why. Imagine—Adolf is in his bunker. The Russians are a few miles away and getting closer. His mistress has just killed herself. He puts the gun to his head and pulls the trigger. The firing pin strikes the primer, the gunpowder explodes propelling the bullet towards Hitler’s brain to end his life. Now say, theoretically, that in that millisecond it takes before Hitler is dead, Hitler turns his life towards Jesus and asks for his forgiveness and proclaims Jesus as his savior. God would forgive Hitler for all of his sins and Adolf Hitler would spend eternity in Heaven with God (maybe a few million years in purgatory but that’s another blog altogether). You are probably saying, “Jamie, that’s fricken crazy, stupid, dumb—that would never happen.” I’m not saying at all that it did—I am just trying to get across to you the infinite mercy, His desire to sin, and His desire for no soul to go to Hell.
If one drop of water contains all the mercy God needs or if He is capable of forgiving Hitler, please, do not think that anything that you have done in your life is too much for God too forgive. God loves you. Don’t be afraid of Him. “Jesus, I Trust in You.”