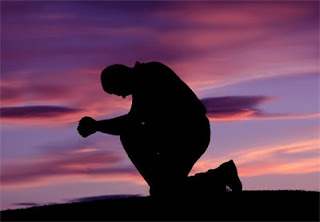 Part of the problem with vacations is that you always need at least one more day. Either you are just wiped out from the trip and need to rest or the stuff that is waiting for you at work makes you think you would have been better off never leaving.
The second dilemma was my problem last night as I returned from a week away. When I returned, I was bombarded with personnel issues, crime issues and discipline issues. In my first hour, I had three closed door meetings with my subordinates. One had a transfer request and the other literally had a list of issues.
To say that I wanted to just turn around and go home is an understatement. The only problem is that those issues would be there whenever I returned so I had to stay and battle it out. I've discovered over the last--oh, few months--that when things get stressful like that I need some God time. Oh, it's easy to say, "turn it over to God." That is easier said than done. It's times like this when you need a good prayer life.
My prayer life is the weakest link of my interior life and that's sad I know. I wish I could say I spend hours a day in prayer or meditation but to be truthful, I'm lucky if get my morning or evening prayers in. Here is the great thing about prayer though---there are so many forms and means that there really isn't an excuse for not having SOME form of prayer life.
There is meditative prayer, Liturgy of the Hours, the rosary or even just ejaculatory prayer (the quick and sudden, "I love you, Jesus" or "Be with my, Lord" type of prayers) The type of prayer I find myself using most often is just the conversational prayer. I just talk to God and tell Him my problems or ask His advice. It's easy to do and you can do it whenever or where ever. You can do it on your morning walk or on your drive home from work. The most important thing is shutting the heck up and listening instead of doing all the talking.
This is what I had to do last night. While I wanted to go one of my hiding spots that I know is close to Jesus and do my evening prayer, I needed to go talk to people and do some supervising. So while en route to where I was going, I just talked to God. Instead of me feeling like I was just putting my problems at His feet I felt like He lifted my burden.
Another important thing about prayer, is no matter what form you chose, you need to do it often. You wouldn't feel comfortable going to someone that you had not spoken to in years and talking about all your issues with them so why would you be comfortable talking to God that way. Also, you will find that He will help you in your daily struggles. I've heard that someone suggested to the nuns of Blessed Mother Theresa's order that they could do more for the poor if they didn't spend so much time in prayer. They were aghast and said they couldn't do what they DID for the poor without their prayer life and that they wanted even MORE time for prayer. Personally I know that I can tell those days when I haven't prayed. My struggles seem more intense. I can tell that my vices work more on me on those days.
Returning from vacation does not need to be that bad. Our daily struggles do not need to be that bad if we just talk to God about them. He will be there for us.