Image of Pope in Emergency Room

Last week, Pope Benedict XVI, who is vacation in northern Italy, fell in the middle of the night and broke his wrist. The next morning, after mass, he was taken to the local hospital. Normally, you would think when a world leader would come into the hospital he would go to the front of the line. Pope Benedict XVI waited his turn though and let the person who was in front of him to be seen first.
I just had several humorous images of what the next guy who came into the ER saw when he walked in. Was the pope: 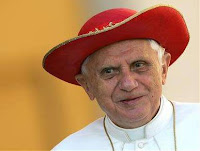 One last thought--were the Swiss guards there with their pikes, helmets and funny outfits?? Just thoughts, maybe a little on the crazy side. I fully commend the Holy Father for waiting his turn. Heck, I think any of us would slip in front of people as opposed to sitting in the ER!!