I expect you are tired of hearing the name Michael Jackson but I just have one thing to say before we shut the lid on him. I'm really disturbed about how people treat celebrities. It seems to me that it either borders on idolatry or on hatred.

On the one hand, you have people going absolutely bonkers over a pop music singer. Police were telling people not to even try to go to Staples Center during Michal Jackson's memorial service because of the throngs of people. For the last week and a half, Michael Jackson is all we heard about. Talk about your Golden Calf. People seemed to be bowing down and worshiping at the feet of the deceased singer.

On the other hand, you only have to go as far as your local grocery store check out lane to see the venom that society spews at celebrities. The tabloids spew hatred about different singers or actors speaking of what stupid thing they did this week, or how they looked disastrous in such and such outfit. They post pictures showing how they have cellulite or how they appear anorexic. To make it all the more confusing--the same celebrity they are tearing down this week they will be building up next week.

This isn't going to be some posting on how celebrities or athletes are overpaid or shouldn't be someone to look up to. Sure, it's a shame that athletes make millions while teachers are below the poverty line. Sure it's a shame that singers are fawned over while paramedics receive little praise. But that's the way society is. Nothing I'm going to say is going to change it so why complain about it.

What I'm more interesting is getting people to see the humanity that is wearing that sports uniform. Or see the person behind the persona that they are playing for the camera. We spend all our time either idolizing or tearing down a celebrity that we fail to remember that they are made in the image and likeness of God just like us.

Two things help me remember this. The first is that because of my job I've been fortunate enough to watch baseball games from inside major league dugouts. I've been able to watch Major League Baseball games standing next to the likes of Albert Pujols, Joe Mauer, Mike Sweeney or Derek Jeter. I've been able to have conversation with these world class athletes and they are just people like you and me. They have ups and downs, joys and concerns and they like to joke around and have fun just like you or me.

The other thing that helps me remember this is Twitter. I'm an admitted geek so I admit I follow a few celebrities like Joakim Soria or Adam Savage from Mythbusters. But admittedly one of the more intere 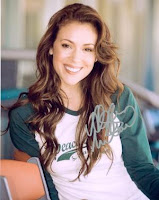 sting people to follow is Alyssa Milano. I don't recall how I found out she had Twitter but it was a fluke. I had a crush on her as a kid so I figured what the heck and clicked, "Follow." I'll tell you what---she is fun to follow. Her Tweets range from Iran to being on the movie set, from baseball to dancing around with pimple medicine on her chin. She just strikes me as a normal, down to Earth girl who just happens to be famous.

I firmly believe that if fail to humanize celebrities or athletes and instead idolize them or tear them apart it becomes easier for us to dehumanize the people that we come into contact on a day to day basis. We need to see Jesus in all people--whether it be a celebrity or a bum on a street corner. If we do that then we are one step closer to being Christ-like ourselves.