On Wolves, Sheepdogs and Sheep--Take 2. 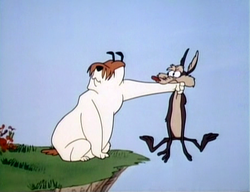 Last May, I wrote about Dave Grossman's article "On Sheep, Wolves, and Sheepdogs." My blog can be found hereif you would like to reread it. Mr. Grossman's article says in a nutshell that people can be divided into three categories: sheep, wolves and sheepdogs. I recently had a new thought about that article and mine. In my May blog, I commented on how the sheepdogs also need to be careful about those spiritual wolves and to alway seek comfort in the Shepherd.

This brings us to the sheep of the world. I've already said that we are all sheep. I've sort of separated two types of people out already according to Mr. Grossman's article--the sheepdogs and the wolves. What about the others?? What about the sheep who don't see themselves as sheep, sheepdogs or wolves? These are the lost little sheep. They probably don't even know they are lost. They definatly won't admit to being lost and darn it to heck---they will refuse any help from a shepherd. Heck, they may even mock those who do accept help from the Shepherd. These sheep can also become wolves when they prey on other sheep not for gain but to drag them away from the shepherd and make them become lost sheep also.

I realize this is kind of scatterbrained and does not flow very well--except maybe in my mind. In the end, it's very simple we ALL need the from Jesus--the Shepherd. We are all, in reality sheep. If we turn away from Him we will become lost. The sheepdogs will become strays, the wolves will continue to pray and the sheep who refuse to follow Him will be lost.

If you are lost, fear not. It says in scripture that the shepherd will leave the 100 (probably because he knows the sheepdogs have his back) in order to go find the one lost sheep. If you are lost, allow yourself to be found. Pray for God to lead you. Pray for his forgiveness, and turn yourself over to the shepherd.