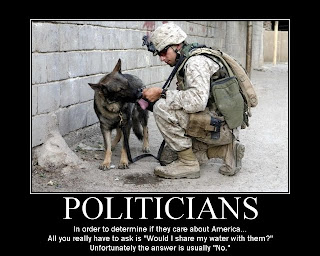 Someone posed a question to me on Twitter that said, "If the rest of us tried to lie daily at our jobs we'd be fired. Why do we not hold our elected officials to the same?" It was in response to my tweet about being naive for trusting politicians because I had put faith in Rep. Bart Stupak and other "pro-life" politicians who, I feel, that instead of standing up for the rights of the unborn bowed to party lines and voted for the health care resolution. I felt lied to and it was not the first time I had been lied to by a politician. I have also received a letter from my state senator in regard to the Health Care bill and the response was filled with lies.
Why don't we hold elected officials to the same standards we hold ourselves to? I know that as a police officer my word is all I have. I have to be trusted. If I'm not trusted then I may not be believed when I am testifying and a criminal may be let go. Officers who have "Brady issues" might as well consider their career over. If other people would lie to their boss or lie to co-workers they would find it difficult to to their jobs.
But there are some professions that lying seems to be considered okay. There are stereotypes of used car salesmen. Gauging by all the "lawyer" jokes that are out there, people think that attorneys are snakes. Politicians are another profession that people do not trust because they say what they have to say to get bills passed and to get re-elected. That, as they say is, politics.
But, isn't lying a sin? Aren't we, as Christians, held to a high standard? Is lying ever okay? Sure, sometimes we don't tell the truth in order to protect people. Anyone ever have a spouse say, "Do these pants make my butt look big?" Any guy who has been married for any time knows how to answer that. I've gotten in trouble because my wife will ask me how she looks and I'll tell her, "beautiful" without even looking at her. We can lie in order to protect someone. You can't say that some family in World War II was sinning if they were hiding Jews and they denied that to some Nazi soldier. And I have been known to spin a lie in order to help my kids continue to believe in the white bearded, red-suit wearing fat guy from the North Pole.
But is it okay lie in order to sell a car, in order to brokerage a deal, or in order to pass a bill? I fully understand that is how things are done. It doesn't mean that I have to accept it. I surely won't buy another car from a salesman who lies to me and I certainly won't vote for a politician who lies to me. So for those who do, I have my eye on November, 2010 and 2012.