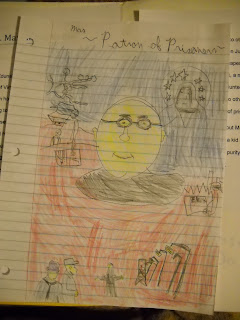 Note--I am honored to have a guest blogger this morning: My nine-year old son, Maxwell. He had to do a saint report for school complete with drawing of the saint. Originally he had St. Veronica but could not find much about her so he chose St. Maximilian Kolbe. His mom helped him with it and I he didn't do a bibliography so I don't know how much is plagiarized. Enjoy:

Maximilian Kolbe was born in Zdunska Wola, Poland in 1894. When he was 12 years old he had a vision of Virgin Mary. He asked Mary what was to become of him. She came to him holding to crowns, one white the other red. She asked him if he was willing to accept either of these crowns. The white one meant that he should persevere in purity; the red one meant that he should become a martyr. He told her he would accept both. St. Maximilian entered the Franciscan junior seminary in1907, at the age of 13. He took his final vows at the age of 21. He almost died of tuberculosis in 1917. This left him frail for the rest of his life. Maximilian Worked in Poland, Japan, and India. He printed Japanese version of the magazine Knight of the Immaculate, which he had published in Poland to fight religious apathy. He founded a monastery in Nagasaki, which continues today. In mid-1932 he left Japan for India. He created another monastery in Malabar. Poor health forced him return to Poland. Maximilian was arrested by Nazi forces and put in prison Feb. 17, 1941. On May 28, 1941 he was transferred to Auschwitz and branded prisoner 16670 He was beaten many times. He ministered to other prisoners and said mass using smuggled bread and wine. In July 1941, there was an escape from the camp. When a prisoner escapes, ten other prisoners are killed. The guards chose Francis Gajowniczek, a married man with young children to die for the escape. Maximilian volunteered to take his place. Maximilian dies as he had wished, in service to others. Maximilian Kolbe’s feast day is August 14. He is the patron saint of prisoners.
What I most admire about Maximilian Kolbe was the vision he had of the Virgin Mary. He was only a kid at the time and he chose to both options she gave him, to maintain purity (priesthood) and to become a martyr. His decision was a good man.