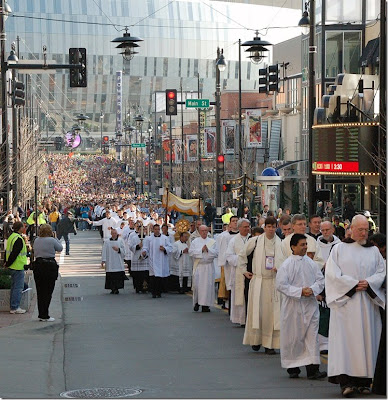 I returned home from the National Catholic Youth Conference yesterday. Fortunately for me it's only about a thirty minute drive from our parish to the hotel we were staying at so I did not have to suffer through a long bus or plane ride. A ten to twelve hour bus ride would have been worth it though! For those who have never been there--NCYC is a jaw dropping, mind blowing, inspiring, awesome, breathtaking experience. I could probably figure out some more descriptive words but I would have to go Thesaurus.com. Imagine 20,000 kids from around the United States descending on Kansas City in order to praise God and learn more about their Catholic Faith.

Saturday night, I sat in the lobby of our hotel and asked the kids from my parish what their favorite thing of NCYC was and there were a number of good answers. For me though, I would like to list my top ten amazing things about NCYC. Well, it was GOING to be top ten but I couldn't stop! So starting with number fourteen and going to number 1:

I think a good nickname for NCYC would be NC"WOW"C because for three days all you can say is "WOW!!" NCYC 2011 will be in Indianapolis--ten years after they hosted in in 2001. There are 20,000 people who can't wait but until then, I will see you in the Eucharist and remember---"YOU ARE LOVED!!"

Note--the general sessions and many of the workshops were shown live online and will be available for views at mycatholicvoice.com