A week ago Sunday was the first time that I had stepped foot onto the campus of Notre Dame.   A friend had been going every summer for several years and had become a huge fan of it.  I had grown up a Notre Dame fan if for no other reason than "they are Irish and they are Catholic."  In reality, as a kid from a small town in northwest Missouri,  I was very ignorant of the campus in northwest Indiana.

As I grew older, I became more neutral towards Notre Dame than anything.  I think I had a couple of Notre Dame sweatshirts from the early 90's (I don't really throw clothes away) and I might have cheered for them if I happened to see them on television.  That changed in 2009 when Notre Dame featured President Obama as their commencement speaker and gave him an honorary degree.   As a Catholic, I felt it sickening that they would do this considering how pro-abortion President Obama showed himself to be then and has proven to be.  The president doesn't try to downplay this, even saying recently, "God bless Planned Parenthood." 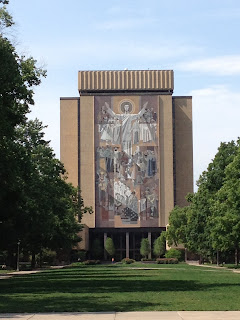 At that point, I became anti-Notre Dame.  There was no way I could support them.  It was then that I signed up and got on Project Sycamore's email list.  Project Sycamore is an organization made up of Notre Dame alum and supporters that is concerned about the secularization of Notre Dame and want to help maintain her Catholic identity.

Every few months since then, I've gotten bulk emails from their president, William Dempsey, telling me about different events or situations at Notre Dame that would be considered scandalous or goes against Catholic teaching.  I'll be honest, I usually only glanced at the headlines and rarely read them in detail as they were just another thing filling my email.  For all I know, the email may also talk about the great Catholic events that were occurring on campus.

After several years of getting these emails, my mind was made up.  I believed that Notre Dame was Catholic in name only and should be stripped of the title of being a Catholic University.  There was certainly no way I was going  to spend my money or waste my time going there.   I'm not sure what made me change my mind and persuaded me to go----------correction, I didn't know what changed my mind and persuaded me to go but I do now.

I got to Notre Dame on Sunday night, just in time to make it to the 9pm mass at the Basilica of the Sacred Heart and left five days later right after the ND Vision mass at DiBartollo Hall.  In those few days, my opinion of Notre Dame has forever changed.  There is no doubt in my mind that Notre Dame maintains a strong Catholic identity.  There is no doubt in my mind that God changed my mind about going and persuaded me to go because I encountered God on that campus like I have never encountered Him before.  For a few example as to how I encountered Him there check out my post on my "Favorite Things about ND Vision-CYM."

That being said, I will acknowledge the fact that I was basically on a week long retreat and surrounded by other people on the same retreat.   I am totally ignorant of what the atmosphere may be like during the school year and in the classrooms.  I will also point out that the Sycamore Trust would acknowledge the fact there is still a Catholic Identity.  In fact, it states that it's mission is, "....preserving the Catholic identity of the University."

So, I've gone from quasi-fan, to anti-Fighting Irish to thinking that the campus of Notre Dame is my favorite place on Earth.   I would be frustrated that it took me so long to discover this but I trust that I discovered it when I was supposed to.  I'm also glad that there is an organization, like Project Sycamore, that is protecting my favorite place on Earth and helping her keep her Catholic identity.