Last week, I spent a week at Notre Dame in South Bend at a conference called "ND Vision-CYM."   When I had signed up, I was basically planning on being a chaperone for high school teens like I have been for a wide variety of different events in the past.

I was wrong though.  While ND Vision is a program for teens, the CYM portion is geared just for the adults.   The teens are taken care of by "mentors"--college students who help guide them and expand their faith and the adults have minimal contact with the youths. 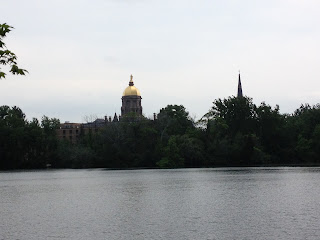 As soon as I realized this, I was excited.  With no kids to be responsible, I could have a nice relaxing week to myself.  Was I ever wrong.  At Vision, God pushed me and pulled me and turned me inside out.  He really put me through the gauntlet.  And I loved every moment of it.   So, like I did after returning from NCYC, I've made a list of my favorite things about ND Vision-CYM.  You may think some things are missing from my list, such as the grotto or the Basilica of the Sacred Heart.  They aren't missing.  Those items would be part of my "Favorite things about Notre Dame" but this is solely covering my experiences for this week.

1. Closing mass-- As I said, this week was very trying for me.  There were a lot of tears shed.  I felt the presence of God like I had never felt Him before.  What was lacking, was joy and it concerned me.  I was having a good time but that joy, that I've always been proud to show off was missing.  Until the closing mass.  There, something happened that made me smile and giggle a little bit.  And then, I could not help but to smile.  God was there with me again and I was smiling ear to ear.  I actually got the attention of the person next to me to show off my smile.

2. The Presence of God.   God was with me all week.   But one incident, though subtle, struck me as miraculous.   Wednesday afternoon, I had decided to spend some time in prayer and to walk around one of the lakes on campus----the Lake of St. Mary.  Along the back side of the lake was a bench and I sent down for a few minutes of alone time with God.   There is nothing around me a view of the campus and woods.  All of a sudden, I smelled the fragrance of flowers.  It wasn't strong but it wasn't subtle. I looked to my left and I looked to my right.   I felt it was a sign that God was with me.   I've since been made aware that the scent of flowers is a sign of the presence of the Virgin Mary.  It was the Lake of St. Mary.  Perhaps this was it.  I'm not saying who was there.  I'm just describing what I experienced.

3. Returning Home At the opening theological primer, Dr. Timothy O'Malley quoted St. Augustine when he said, "My heart is restless, O Lord, until it rests in you."  When I returned home at about 1:30 on Saturday morning, I saw my wife Abby as a sacramental---a physical sign of God's grace and love and a symbol of this quote.   It was more than just being home.  It was more than being with my spouse.  I was calm.   I was relaxed.  As Abby placed her hand on my forearm, I felt God's calming presence.

4. Reconciliation Tuesday evening was reconciliation and I went for the first time in three months.  Confession is so freeing.  It will probably make any list of my favorite things.  This was even freeing in the penance given.  It wasn't difficult but it was challenging.  It pushed me and made me think.

5. Solitude  Prior to the reconciliation service on Tuesday night, I spent some time alone.  I went down to the Lake of St. Joseph where the have a Stations of the Cross set up.  I did that and was pleasantly surprised when I discovered that at station 12---the crucifixion--there is a life sized statue of the crucifixion along with statutes of the Virgin Mary and, I assume, Mary Magdaline, along with a kneeler so you can pray at the foot of the cross.  Afterwords, I continued to walk around the lake.  I then went towards the Basilica of the Sacred Heart.  As I walked under the Golden Dome I realized I was alone.  Literally, there was not another human in sight--up and down the normally busy quad.  I realized that I was alone during most of the time while I was walking the lake.  I then went inside the basilica and there were only a couple of people in the large church. I felt as if I were alone with Jesus.  I enjoyed the quietness, with no distractions.  I enjoyed the solitude, although I know I wasn't alone. 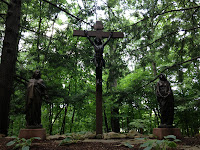 6. Adoration -- just like reconciliation, will make any of my "favorites" list.  This was in a beautiful chapel in one of the dorms.  I walked in with my friend, separated and went over by a window, set my stuff down and sat there in quiet prayer.  The priest then came in, took the Blessed Sacrament from the tabernacle and placed it in the monstrance.   I placed my arms across the back of the chair in front of me and placed my forehead on my arms and a wave of emotions came over me and tears started streaming down my face.  What a feeling to be in the physical presence of Jesus.