Over the past month or so I've heard a couple people talk at different venues about how God describes Himself as "Father" and how sad it is that in today's world so many kids don't understand that example because they don't have good examples of fathers for themselves. Their own fathers are bad examples because either their fathers were just sperm donors and they never knew him or because they were abusive or just absent--even if they were physically present.

I am one if those kids who fit in that profile. My parents were never married and my mom left my father when I was an infant.  And he never made any effort to keep in contact.  I looked him up when I was 21 and we met.   I don't know what I was expecting.  But things didn't work out and I didn't keep in contact with him.
So as I started getting into my faith, I did have difficulty understanding what what "a father's love" meant because I didn't think that I had ever really experienced it.  But upon meditating upon it I realized I had.
First of all, my biological father may not have been there for me but there were several men in my life who were father-figures to me.  Primarily my grandfather who I lived with while growing up.  But I also had six uncles who all provided examples of fatherhood to me and even though I was just a nephew they loved me and took care of their baby sister's little boy.  Finally my babysitters husband, Kenny Harris, was another man who was like a father to me.  So, I may not have grown up with a biological father but I was better off--I had eight men in my life who showed me what it meant to be a man and to be a father. 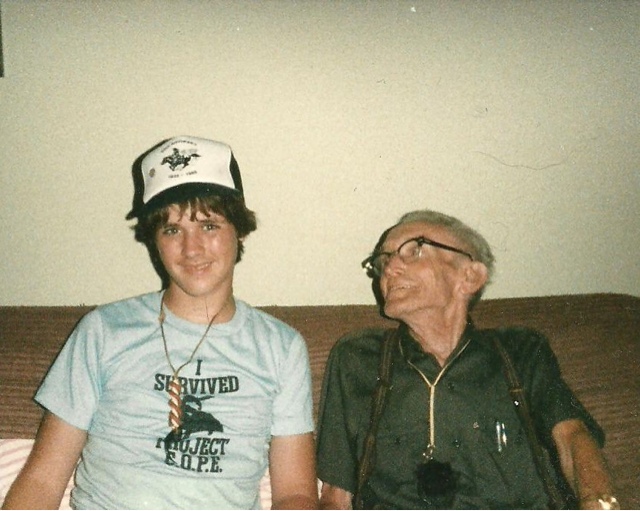 Secondly, by the time I really started getting into my faith, I was a father myself.   In fact, the reason I came back to the Catholic faith was for my children---- because I wanted them to know God's love.  So, I knew what a father's love was because it was what I felt for my own children.
Finally, I knew what it was because I had felt God's love for me.
The are some who don't believe we should use the analogy of a "Father's love" because of the fact that so many people don't have father's of their own.   They have even tried to turn God into a woman and into a more motherly role.
I think this is a mistake----not to take anything away from mothers.   But if God describes Himself as a Father---calling Himself "Abba" or daddy---then who are we to challenge that.   It is wrong to change scripture to fit our agenda.
And in the end---maybe it is for the men in the world to mold ourselves into that example of Fatherhood that God has set for us instead of changing what He said.   We should show a Father's Love to our children....tender, stern, loving, forgiving, merciful, and fun.   All of the deadbeat dads in the world need to look at God as and example of what they need to be or transform themselves into that roll.