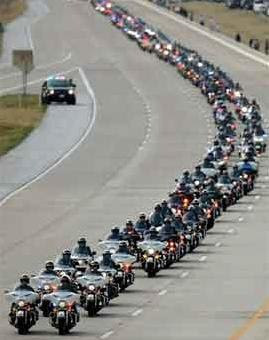 A long procession of police cars with their overhead lights on. Police officers standing at attention saluting. A 21-gun salute. A lone bugler playing TAPS in the background. Bagpipes---oh, the friggin bagpipes. A radio announcement broadcasting the end of the tour of duty of a police officer. A helicopter fly-over. Police funerals are very somber occasions. Macabre as it may seem---about weekly, I imagine what if one were mine.

What if something happened to me, either on-duty or off, and my brothers in blue came together to send me off. It's always a very troubling thought. Not because of what it means for me. I am reasonably determined, depending on the day and my state of grace for that day, that eventually I'll be in Heaven. I may be shutting out the lights in Purgatory--but I'll get to heaven. What bothers me is how it will affect my wife, kids and friends. I think I am a decent enough person that they might be slightly bothered by my early demise.

People don't like to think about their deaths. I suppose in my job it is natural. You see death quite often in many forms. I believe that thinking of death is a valuable exercise in this line of work. It's important to realize that you have a dangerous job. It's necessary to realize that you can get seriously hurt or even killed. When you keep that in mind you are more likely to keep alert. You are more likely to be aware of your surroundings. You won't take people for granted. You are run scenarios through your head--"if this happens what should I do." You are less likely to get lackadaisical because you don't want to have that police funeral anytime soon.

Thinking about death can be very important in the spiritual life. It's said that it's very important to meditate on the "four end things" which are-death,judgement, heaven and hell. It's sort of like checking our moral compass to make sure we are heading in the right direction. When you pause and reflect that we are all going to die eventually. We are all going to be judged. And we are all going to either Heaven or Hell. It's that gut check that may shake you back to reality and realize, "Oh crud, I need to straighten up!" much like a cop needs to realize that if he does not practice good officer safety that there is a good chance that he might get kicked in the crotch---if he's lucky.