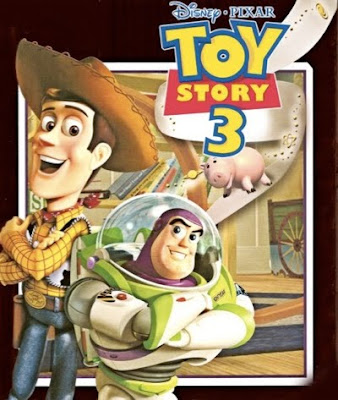 ***SPOILER ALERT***
If you haven't seen Toy Story 3 then get thee to a movie theater to watch it and then come back to this blog and let me know what you think.
I took my kids to see Toy Story 3 last Friday and we really enjoyed the movie, as we enjoyed the previous two movies. Since, I put on the spoiler alert I could assume that you all have seen the movie and I shouldn't have to explain the move to you but as I'm sure there are some people who ignored my warning and read on I'll give a short synopsis:

The story is about the Woody, Buzz, Mr and Mrs Potatohead, Rex and other toys from the first two movies. They are the remaining toys from Andy's childhood as he prepares to go off to college. Andy is forced to sort his room and throw away items and choose what items he is picking to put into storage and toys to be donated to a day care. Andy picks the toys out of his toybox and puts them in trash bag to be put up in the attic. The trash bag gets picked up by his mother, who things it's garbage and puts it out curbside. The toys escape and make it to the mother's car and another box which is going to Sunnyside Day Care. It's determined that the day care isn't the glorious place it appears to be, Woody, Buzz and the others escape and make it back to Andy's before he leaves for school. Then, through a set of circumstances, Andy makes the decision to give the toys to a family friend who has a young girl--with the exception of Woody, who is going to go to college with Andy. They girl instantly falls in love with the toys, including Woody--who climbed into the box. At first, Andy is hesitant to give away Woody but--with not a dry eye in the theater-- finally relents and gives her his favorite toy.

As I was watching the scene in which Andy is giving away his toys, I was getting all choked up, getting a little teary eyed (I pretty sure I wasn't the only one who got all teary eyed as you can see here.) What the heck was I freaking out about. These are toys! This is an animated movie! I rationalized with myself that even though these were both true statements we, as movie goers, had assigned human personalities to them. After all, through three movies now, we had seen their adventures. We have seen them talk and walk and show fear, happiness and sorrow. In our minds, they weren't toys, or a cartoon---they were just as human as a human actor in a live-action movie.
Or was that all there was to it? Maybe we could associate with Andy and how he felt in giving away his toys. After all, we have all had to get rid of personal belongings before. We've all had belongings that have sentimental value to us. The question is--how much sentimental value to we put on these things. On one scale we hold valuable those things that bring back memories--photographs, trophies, maybe other inanimate objects. For instance, a decade ago my wife sold my trombone from high school band and I was TICKED! (Men, if your wife is having a yard sale keep a close eye on them) This piece of brass was dinged up and hadn't been out of it's case in nearly a decade. It was serving no purpose. But I allowed myself to get upset about losing this inanimate object that in years past I had made music with (now that I think about it--I don't think she ever gave me the money for it either)
Other times, we hold attachments to personal items that don't hold sentimental value but are more practical. We are upset about losing these items, such as televisions, computers, stereos, cars etc. These are items what we would lose in a burglary or something. For instance, the computer I am typing on holds a lot of value to me. If something would happen to it, I would be really frustrated. They can be easily replaced but yet, we hold some sort of personal attachment to them.
Here is the thing about objects, they are only objects. We need to learn not to have these attachments to them. By holding attachments to physical items we are distancing ourselves from God. We need to learn to not have these attachments. This is not to say that physical things are bad. After all, we were made as physical beings, as well as spiritual beings. God made the world and everything that is in it. Everything that God made is good. The problem is that a disordered attachment to physical things can lead to sin. It can lead to greed. It can lead to envy. It can even lead to pride.
The bottom line, is that everything we have in this world has been given to us from God. When we die, we aren't going to take anything with us. So, maybe it's time to have a yard sale and get rid of that old wicker furniture and that old trombone from high school as well as those Woody and Buzz dolls (or are they action figures?)
As an extra, check out this site for neat little trivia about Toy Story 3.