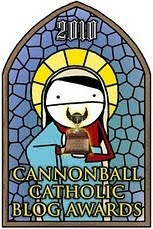 As I mentioned earlier this week, Roman Catholic Cop has been nominated for Best Spiritual Treat in the 2010 Cannonball Catholic blog awards over at The Crescat. Polling is now open and I'm taking the lead of my friends at Defend Us in Battle and start politicking and asking people to vote for me. (Defend Us in Battle are themselves are nominated for the "Best New Kid on the Block" and "Best Under Appreciated blog" categories so go to their site for the link to vote for them.)
So, click here to go directly to the poll to vote for me. I'm not saying that it will help you get to Heaven or that a vote for me is pleasing to God----but then I'm not saying that it's not. So why take your chances and vote for Roman Catholic Cop!