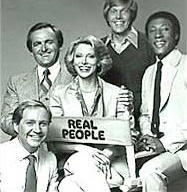 There was a television show on NBC from 1979 to 1984 called "Real People." It was based on a news show but went around the country profiling your average, run of the mill type people--although it centered around the quirky type people the most. "Real People" was a popular show and while I remember it poking fun at a lot of people I think it is important to look at everyone, even the one's who may be a little odd as just "real people." In a mass of humanity, it is very easy to forget that the other person you see is a child of God just like the rest of us.
I think, too often, we tend to make other people faceless people instead of people with cares and concerns, without joys and worries. One way we do that is by stereotypes. Heck, look at catholics and how we are stereotyped. People look at us as joyous, guilt filled type people who are trying to earn our way into heaven. I even wrote before how a "joyous catholic" isn't an oxymoron before. It goes further than that--we see nuns as these stern sisters with rulers who are going to yell at them. There is a horrible stereotype of priests out there due to the scandals. What do you imagine when you picture a catholic mom who stays at home to home school her eight kids?? Probably as some prude who wears "denim jumpers" and is boring as all get out.
I'm here to say that these stereotypes are not true. Catholics are some of the funniest people out there. And I'm talking about Catholics who LIVE their faith. Sure, sometimes it's hidden. Sometimes you have to spend time with the priests to see them laugh. Sometimes you have to see the nuns on their free time in order to see them playing soccer (and hiding the soccer ball under their habits.) Sometimes you have to get to know the Danielle Bean's and the Maggie Crawford's of the worlds to find out that the stay at home moms out there are anything but prudes!
As Catholics we have to live past the stereotypes--that's for sure. We should be happy, and goofy and joyous because we know that whatever struggles we face that we already know the ending. ;-) We also need to return the favor and look out and instead of seeing faceless drones we see those children of God---our brothers and sisters in Christ.