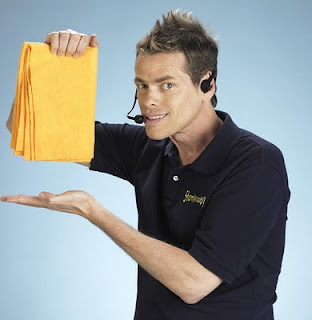 My wife, Abby, and I have agreed that we just cannot have salesmen come over to our house any more. For some reason we always fall for their pitch. Twice in the last year we have succumbed and agreed to some unwise purchase. The first one was for water filtration system and the second was for new windows for our house (and that was after being told by my window salesman uncle that they were way overpriced!!) Fortunately, cooler heads prevailed and I called them both the next day to forget about it. But I don't think we are the only ones. People fall for the fast talking salesman everyday. The late Billy Mays made a career out of it. I saw at some store they have a whole "As Seen on TV" section. People buy Sham-wows, Ginsu knives or those silly blankets with sleeves on them. (Which in reality is just a robe worn backwards!)
We buy things from these strangers who come into our homes either on television or in person and spend our money easily. Why are we so hesitant to believe the Church when she tells us what the truth is about faith and morals. We know that Jesus loved us so much that he started the Church. He put the people in place to lead it after he was gone saying whatever you say is valid here on Earth and in Heaven. Jesus said that he will be with the church until the end of times and it will never fail. Peter and the other apostles ensured that a line of succession was established for when they were gone.

"Just proof that the Church needs to get with the times," you might say. Society changes but truth does not. That's another reason to follow the church as opposed to the slick snake oil salesmen that try to sell us something that sounds too exciting to be true. Those salesman have another goal in mind besides our good. The churches goal is to save souls.