Christmas Isn't Over Yet!! 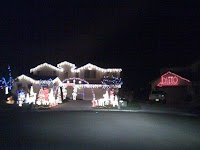 Twice in the last couple of days, I've seen friends post as their Facebook status they they have taken down their Christmas decorations. My instant response was, "BUT CHRISTMAS ISN"T OVER YET!!" Isn't it ironic that we see Christmas decorations arrive in the department arrive as early as September in the department stores and many houses have them up around Thanksgiving but the presents have barely been opened and people are ready to take them down.
Yes, in modern day society the Christmas season starts on "Black Friday" and may last as long to December 26th, when everyone has the opportunity to exchange the presents they did not like. What a horrible, secular and commerical view point of Christmas.
But in the Catholic Church, the Christmas seasons starts on the evening before Christmas Day and lasts until the Feast of the Baptism of the Lord. This is traditionally celebrated on the Sunday after the Feast of the Ephany (January 6th)
The four weeks prior to Christmas is the season of Advent. This is the time we were prepare for the coming of our Lord. It is a season of anticipation, of penence and preperation. Then during the Christmas season we celebrate the birth of Jesus.
If you have ever wondered where the "Twelve Days of Christmas" song came from it is from this period of Christmas starting Christmas day. It is said that each of the gifts symbolize a different Christian ideal. I found these at
A Partridge in a Pear Tree: Jesus Christ
Two Turtle Doves: The Old and New Testaments
Three French Hens: The Theological Virtues (Faith, Hope, and Charity)
Four Calling Birds: The Four Gospels / The Four Evangelists
Five Golden Rings: The first Five Books of the Old Testament, the “Pentateuch”
Six Geese a-Laying: The Six Days of Creation
Seven Swans a-Swimming: The Seven Gifts of the Holy Spirit or the Seven Sacraments
Eight Maids a-Milking: The Eight Beatituded
Nine Ladies Dancing: The Nine Fruits of the Holy Spirit
Ten Lords a-Leaping: The Ten Commandments
Eleven Pipers Piping: The Eleven FAithful Apostles
Twelve Drummers Drumming: The Twelve Points of Doctrine in the Apostle's Creed

The other seasons on the Church calendar are "Ordinary Time" which stretches from Epiphany to Ash Wednesday, "Lent" which last from Ash Wednesday to the Easter Vigil, Easter--which starts Easter Day and lasts until Pentacost and then another stretch of Ordinary Time which lasts from the Monday after Pentacost until Advent.
So don't get in a rush. There is no fire. Keep your Christmas tree up for another week, after all--Christmas only comes once a year.