I've been praying and thinking over something that is really confounding me.

A few weeks ago, I went to confession and it was a pretty typical confession for me.  "Forgive me, Father, for I have sinned, it's been four months since my last confession so on and so forth" and then I told the good monsignor my sins starting with the ones that I feel affect me most or are more severe. 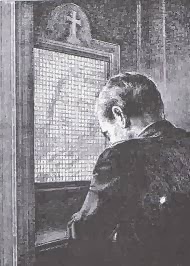 When I was done giving my confession, he says to me, "in regard to your sin of [such and such], typically, the main cause of that sin is because of [such and such.]"  (You'll forgive me if I refrain from spilling all of the beans.  Those who know me well enough can figure it out but I would like the rest rest of you (like my mom) to still think I'm sweet and innocent.)  He then asked if I felt that was the situation in my case.

I thought about it for a moment and then said, "No, Father, I don't think it is true in my case because of [such and such.]"

After a pause, he then said, "okay, in that case, for your penance, I want you to pray and ask God why you are drawn to that sin."

So I've been praying on this and, frankly, it's been troubling.  Why do I do this?? I understand the ramifications of sin and I understand that sin injures my relationship with God and separates me from Him.   I want nothing more than to be pleasing to God.  I want to be a saint.

But, no---I know what is pleasing to God but I always seem to do what is not pleasing to him. I'm not the only one who has wondered why they sin.  I think that's why one of my favorite Bible quotes is when St. Paul says, "I do not understand my own actions.  For I do not do what I want, but I do the very thing I hate." (Romans 7:15).

I do know this much though---it was a very good penance because I has kept me thinking about my sin--and not in a guilt ridden sense or anything like that--but making my tendency to sin and especially--to steer towards this particular sin.  I think this, in turn, has caused me to stay away from this sin when in the past I may have fallen into temptation.