Every since I was a kid, I've been a television watcher.   I was always watching television and I had my favorites such as "Dukes of Hazard" or "The A-Team."  Today, with DVR, Hulu or Netflix, I'm not so restricted with when I watch tv because I can watch shows at my leisure and in any order.

One of my favorite shows is the BBC series, "Doctor Who," which just recently celebrated it's fiftieth year.    Doctor Who is about an alien time lord who travels through time and space in his time machine/space ship called the TARDIS---which looks like a 1960's police call box.

I've seen all of the newer Doctor Who episodes which entails the last six years  but I think there are about 682 of the classic episodes that I haven't watched yet.   I've enjoyed the whole series but I have several favorite episodes such as "Blink," "Let's Kill Hitler," or  "Closing Time."  One of my favorite episodes is titled, "Vincent and the Doctor."

In "Vincent and the Doctor," The Doctor and his companion, Amelia Pond, go back in time and meet Vincent Van Gogh and battle a space monster that was stranded on Earth and which only Van Gogh can see.  It seems that for some reason, Van Gogh can see things that the rest of us cannot see.   This was really demonstrated in a scene where the Doctor, Van Gogh and Amy are laying in a field looking up at the stars.  Van Gogh starts describing what he sees and how the blacks aren't just blacks but more shades of blue and this star is different from that star.  Before your eyes, the evening sky is transformed into his painting "A Starry Night." 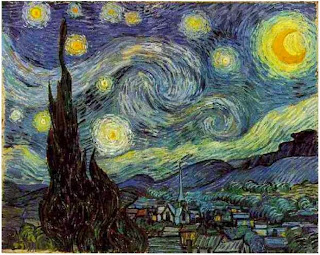 I feel like I had that type of transformation last summer when I went on a retreat at the University of Notre Dame.   God really worked me over that week.  He broke me down and built me back up and helped me see things differently.   I really had that "Ah-ha" moment one afternoon when I was wandering around Geddes Hall and I saw a Van Gogh-like painting  of the Main Building, or the "Golden Dome," at Notre Dame. 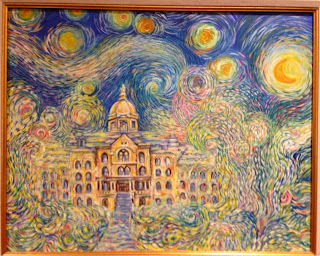 My week at Notre Dame caused me to see God in a new light.  It was like God opened up my chest cavity and poked my heart with His finger.   You can ask the people I was with.  I was an emotional wreck.  I've never felt that vulnerable or that exposed.    I would start crying at the drop of a hat the whole week.   I've never felt the presence of God like I did that week in June.
Because God choose the Notre Dame as the location of this encounter I had with Him, the way I felt and saw Notre Dame that week really felt a lot like this painting---new lights, new colors--a whole new perspective.