Of Baseball and Lent 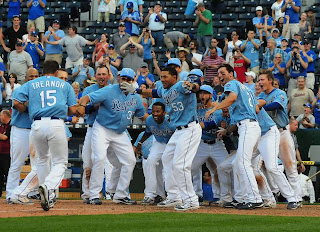 As a Catholic and as a Kansas City Royals fan, this is my favorite time of year.    As a Catholic, we are smack dab in the middle of lent---a season of penance and spiritual repair.  As a Royals fan, we are a week into a new year of baseball--a time of year where every team is still in contention.  Both are a period of setting goals and having high hopes.

I realize that most Catholics probably do not think that lent is a great time of year.  It is a penitential time. It's a time for reflection on how we have strayed away from God and trying to make amends.  We wear ash on our foreheads.  The church is decorated with rocks and dead trees.  We fast.  We abstain.  We go to reconciliation (although you CAN go more than once a year you know).  We don't say or sing "alleluia."   We prepare for the Easter season which is the season of new life.   That's when we should rejoice.  Right?

Let me explain.   I am pretty undisciplined.  Yeah, it's true.  I tend to get excited about self improvement and work hard at it.  But unless, I have someone to keep me in check, I tend to backslide and go back to being "Jamie."  Different things may trigger my renewal and excitement about improving.  It may be seeing myself in the mirror and realizing that I've been slacking at watching what I eat and going CrossFit.  It may be a "meeting" with my captain who is giving me a critique (also known in some circles as a "butt chewing.")  It may be getting hit upside the head with a 2 x 4 by a friend.  And many times, in my spiritual life---it's lent.

Lent is the church hitting me with a spiritual 2 x 4 and reminding me that I've gone off of the path and  need to get back on it.  It's a time of year when you feel like you can just jump back into the spiritual pond.  Now granted---hopefully we do this more than once a year.  That's why going to reconciliation at least once of month is a good thing---and something I NEED.  But for me, lent is a great time of year to REALLY reinvent myself.

Which brings me to the beginning of baseball season.  I am a life long Royals fan.  The Royals won the World Series in 1985 and have not been back to the playoffs since.  They really have not even been competitive for at least the last 15 years and many of those years they have down right stunk.  But it never fails.   Every year there is spring training and every year the season starts anew.  And every year I get suckered in and have expectations that they will be an improvement over last year.  I have hope!  Only to have my hopes dashed by Memorial Day.

This year was going to be different though.  I went into this season realizing that the team hasn't made any great improvements and all of our hopes and dreams are in the minor leagues and I need to be looking towards 2012 and beyond (Baseball America has rated the Royals minor league system the best in the major leagues)   And wouldn't you know it.  They are off to a good start.  They are 4-2 and have a lot of spunk in them.  They won their last four games in walk off fashion--scoring in their last at bat.  Two of the victories came in extra innings.  And their loss today went to twelve innings.  Once again-----I have hope.  I think . . . maybe we will see some improvement this year!  We will see.  More than likely I'll look forward to September call ups and hope that that Yankees and Cardinals fall on their face and miss the play offs.

Seasons are good to the spiritual life.  In Lent, I am given a chance to look at where I am in my spiritual life.  It's a time to see if I'm on course and where I need to fine tune some things. Or if I am way off course it is a time to get my act straight.  And I do that by reflection, penance and rededicating myself to prayer and alms giving.

No, you have to have hope.  You're team may be filled with players that no one else wanted and it looks like another 100 loss seasons.  You may be filled with temptations and desires and it looks like you'll surely be in the confessional again soon.   But the grace of God is better than money (which is what the Yankees used to buy themselves 27 world championships) and God is there to help you find victory because all he wants you to do is to hit it out of the park.