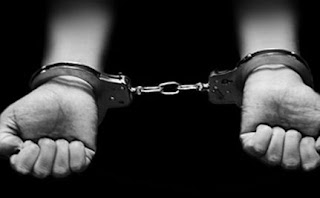 Now take the sin of murder.  True, there is violence every where too.  Violence is on television or in video games.  But not many people have the overwhelming urge to murder someone.  It's safe to say that most people are free of that sin.

Only God gives us true freedom.  Sure, He tells us what is right and wrong.  He gives us the truth.  But we are free to choose.  It's sin and the tendency to truly restrains us.   We can break those shackles of sin though.  Through God's grace we are always able to break free from sin and be with Him.  The problem is that it is not easy for us.  The first thing is often having the WANT to break free from those sins.  We, as humans, often choose to be handcuffed and shackled and to be in a state sin because it's what we are experienced with.  It's what we think is normal.  It's what society tells us is right.

Often times, we would rather wear those chains because of the fear of being free of them.  It is with God's grace that we are able to break those chains but God's grace seems like a hammer and chisel hitting upon those restraints.  As much as we want to be free, we are afraid of the pain that is we are going to have to go through in order to be set free.