Pssst!! Have You Heard?? 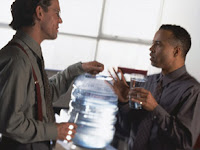 So you may read my blogs about confession and think, "But Jamie, I'm a good person. I don't have any vices. I don't drink to excess. I don't sleep around. I'm not a jealous person. I just don't really have anything to confess!" Imagine, all this time the Church has taught that Jesus and Mary were the only ones without sin. I didn't realize that you too were sinless. Here is one sin that you may not have thought about. How about . . . . murderrrrr!!!!. Yes, that's right. Murder. The vast majority of us are guilty of it in a way whenever we gather around the water cooler and gossip. Hold on--correction--I'm a cop. We are guilty of it when we gather around the "Coke Fort" at the local Quik Trip and gossip about what is going on. (And yes--cops are notorious gossips--worse than little old ladies.)

Your next question is probably how do I relate gossip to murder. A little innocent gossip never hurt anyone right?? If you have ever had an untrue rumor going around about you then you already know the answer to that. Gossip and rumors may not physically hurt a person but they sure as heck can emotionally and spiritually kill a person.
I can hear your next argument. "But there is nothing that I'm saying that isn't the truth!" It does not really matter does it? Sometimes the truth hurts more. Sometimes people mess up but that does not mean that they need to be tried in the court of public opinion. There are private things that the whole world does not need to be privy to. People put themselves in difficult situations and have a more difficult time dealing with their mistakes because of what everyone else is saying. Sometimes their mistakes hurt those who are innocent even more because of the rumors that go flying around.
I'm not casting stones here. I'm as guilty as anyone else. Everyone likes to gossip. Everyone likes to get the latest big juicy news. Why?? Pride. When we spread rumors we are able to look at people in a bad light. We are able to put them beneath us. This makes us feel better about ourselves. Pride is at the bottom of the gossip mill and we need to humble ourselves and shut that mill down.
Whether or not a rumor is true or false they do not need to have their reputation beat down. We need to be loving people. It is a difficult thing to tell someone to stop what they are saying and tell them that you don't want to participate in the rumor mills. Gossip is a vice like any other. The good news is we can bring it to Jesus in the confessional. He already knows what's going on anyway.