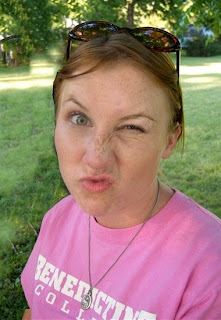 This past Saturday my little sister was married. I was honored to be able to give her away—it was humbling and really big honor. At the reception, they had the bridesmaid and best man give their toast and they left the microphone open long enough for me to jump in. I had secretly been hoping for the opportunity and had thought of something to say but I wasn’t so presumptuous to actually prepare a written statement. Because of this, I really didn’t say what I wanted to say the way I wanted to say it.
My little sister married a really great guy named Ryan and one of my cousins made the point that if he could he would invest in this marriage because he would make a fortune. I can really see the fingerprints of God all over their marriage.
I was 13 years old. I’d never met my father. My mom was single and she came to me one morning and asked, “Jamie, would you rather have a baby sister or a letter jacket.” She had hidden her pregnancy with her ex-boyfriend from everyone, gone to a nearby town and given birth to Maggie. My mom was going to give Maggie up for adoption but was now having second thoughts. She wanted to somehow, make me realize the financial significance of having a newborn in the house.
As a thirteen year old, who’s mother worked nights, my life did change. Maggie thinks that I had someone given up my high school years to watch her on Friday and Saturday nights. Don’t tell her this but I didn’t have that many friends and didn’t get invited out that often anyway. She was no hindrance on my high school years (but, like I said, I like to hold it over her head so don’t tell her)
A year after high school, I went off to college, met the most beautiful woman in the world and started my own family.
Maggie grew up, graduated high school herself and went off to Warrensburg to college to get a degree in theatre. About a month later, she’d had enough and moved back in with my mom. Later, and forgive me if I get stuff out of order---she moved to Maryville and started working on a nursing degree, and then went to Northwest Missouri State University, eventually quit and moved back in with my mom. She may have moved back with my mom a couple of other times in between there or not. She calls this time her “dark years.” I think she may have partaken in a frosty beverage during this time.
Then, she up and moved to Atchison, Kansas. She didn’t have a job or anything---she just moved. I think like six months later, she started college at Benedictine College. While there, she met Ryan who is one of those great guys. You know the type one of the guys who is just so nice that you’d like to bop him in the nose but he’s so great that you HAVE to like him.
They courted---old fashioned phrase but I think that’s actually what you’d call it. He got permission from my mom to ask Maggie to marry him!! He also got permission from me and her best friend. And the rest, as they say is history.
What type of girl does Mr. Awesome ask to marry him? Well, Maggie is pretty cool too. We jokingly call her St. Maggie. She’s gone to school and is getting her degree in Theology and Youth Ministry. Throughout her wedding preparation, she has been very cautious of being a “Bridezilla.” She is very cautious about people’s feelings and tries to make people happy. Like everyone, she has her dark side---I think I have a scar of a bite mark on my left forearm as evidence of her dark side. But she genuinely tries to be a good person and to be pleasing to God. I’d like to think that I’ve had a positive impact on her life and been a good role model as a person, as a husband, and a father. She is one of my favorite people in the world—good and bad. She makes me laugh. I enjoy talking with her and my favorite time of the year are family reunions where we get to sit around the camp fire for some theology on tap (that’s talking religion and drinking).
Now she’s married and you can see God’s fingerprints all over this marriage. For a girl to almost be put up for adoption, be raised by a single mom in a small town in Northwest Missouri, to go off to college in Warrensburg, then back to Tarkio, to Maryville, back to Tarkio, back to Maryville, back to Tarkio, then off to Atchison and finally to Benedictine to meet up with a good Catholic boy from Kansas City.
I think we can all learn something from this marriage. We need to trust in God. Trust that He is the divine gardener tending to us in the garden. Not be upset when that beautiful flower next to us is pulled away---it may actually be a dandelion, a weed that will strangle us. Not be upset when we are piled on by a---well by a bunch of crap. It may very well be the life giving nutrients we need. We need to be careful to always keep ourselves pointed to the sun and when someone turns our base around so we are pointed towards the darkness we need to turn back towards the Son.
Always trust in God but never be so comfortable that we think we are right where God wants us. God has a big sense of humor and as soon as we think we know what He wants He is there to prove us wrong.
Congratulations, Maggie and Ryan. I love you both.