Remember Who You Are

Over the last several years, while on my spiritual wanderings and tribulations, I repeatedly heard advice thrown at me along the lines of I needed to figure out who I was and how to be my own person.    I was told I had a lot to figure out about myself and who I wanted to be.     These are all good pieces of advice for someone who is struggling.     I best advice I got, did not challenge me to change, but challenged me to "remember who I am."

This grace came to me while standing at a Royals game.   Remember who I am . . .

I wish the challenge to "remember who I am" had come to me in the form of Mufasa's head in the clouds and in the voice of James Earl Jones like in The Lion King but, more often than not, God speaks to us in silence and not in great meteorologic events. 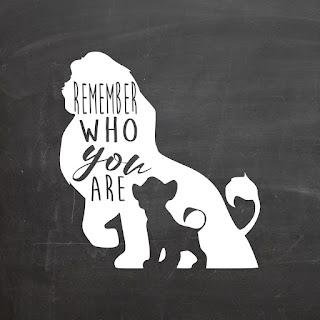 For too long, I had found those things to be too challenging and pushed them away.   I did not realize it at the time but I was avoiding those responsibilities and doing a really poor job at them.  My path to happiness, though, is to accept those roles and their responsibilities and receive the graces that come along with them.

I mentioned in another post "The Running Sheep," I had received advice from my therapist to seek spiritual advice.     That evening, at the Royals game, when I heard to the call to remember who I was, I texted a priest friend of mine and made arrangements to meet with him.   This was my prodigal son moment when I recalled not only "who I am" but "whose I am" and when the Father came down the path to meet me---which is much better than talking to me as a head in the clouds. 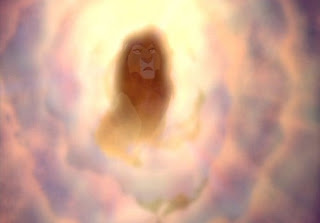