For some time now, for various reasons that I'm not quite ready to discuss, I have been suffering severe loneliness and depression. Let me tell you something--it sucks.   It's more than just being in a funk.  I don't think there is a simple way out.

How do I describe what it's like to be lonely and depressed?   I have to explain it because no one else has ever felt this way.   At least that's how it seems.   You are standing there, the world is going on around you and you are in your own head--which is a bad place to be--and you are thinking "no one has ever felt as low as I do right now."   It's a dark place to be.   There were times when I was laying in bed, trying to sleep, and I felt as if I was laying at the bottom of a pool--total silence, darkness, unable to reach out for help, crushed by my loneliness.    There were other times when I'd be around other people and feel totally alone.   I remember walking around a baseball stadium with 25-30 thousand people there knowing that physically I was not a lone but feeling it emotionally and spiritually---wondering how all of these people could be laughing and having a good time.

I know there are a ton of resources out there for people in my profession.   There are plenty of people to talk to.   If I nickel for every time I heard someone say in a class "call me if you ever need someone to talk to. . . "     I wish it were that easy.  I don't thinking opening up is easy for most people but it's even more difficult for people like police who but up barriers every day at work.  It can be a Catch-22, I don't want to talk to an officer I know, cops are judgmental, cops are blabbermouths.  Just---no.    But then the thought of talking to someone who isn't a cop is just as asinine---they don't have a clue what I'm going through.    (For the record, there are organizations out there where first responders can call and talk to other first responders.  I never used any of them so I'm hesitant to recommend any.)     In all my lonliness, I never had any doubt that there weren't people out there willing to reach down to help me up.     It is just such a huge mental obstacle to get over and it's difficult to explain if you haven't been there.

The resource I did use was my department's Employee Assistance Program.   And I was able to find the perfect therapist--a former first responder who specializes in first responders.   Despite any gains I had from going there, I HATED going every time I did.   Several times, I would see an appointment coming up and would find any excuse to reschedule it.  It was painful. I hated the advice he would give me.   I did not want to do it.  I did not want to be there.   But the loneliness was worse and I knew I had to do it if I wanted to get better.

As I said earlier, cops put up barriers.   It's how we make it through the day.   Most of the time, we just cannot show emotional weakness.  So, we put on masks.   We act as if everything is okay.  So, I was best when I was at work, even though I was alone most of the time.   At work, I'm expected to have my guard up so I didn't have to be emotionally vulnerable.   At work, I could keep busy and despite bad things going on all around me, it was an emotional reprieve when I was busy because I was anywhere but in my own head. 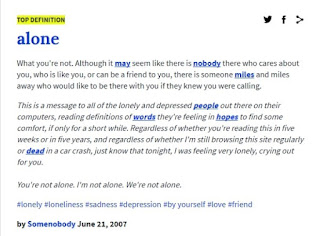 One of the things that helps me the most in my loneliness is this silly thing that I found on the web---I assume it was originally on Urban Dictionary, but in some of my darkest moments, it reminded me of what I already know.   Despite all of our despair and all of our loneliness, we really aren't.  This silly think would give me the courage to reach out in dark times to friends, to relatives--not for them save me and bring drama into their lives--but just to keep me afloat for a minute.   A couple people I opened up to.   Others probably never knew anything was wrong.

I'm doing better now.   I followed my therapists advice.  I took a trip.  I listed to a guy who sounds like a fortune cookie.  I remembered I am His.  I'm not cured and there is a long road ahead of me, but at least not there is some Light.