By now, it does not appear that Todd Akins is going to remove himself from the Missouri Senate race.   I find that unfortunate because, in my opinion--despite his stupid comments about "legitimate" rapes and the rate of conception--he would be a better senator for the State of Missouri and for the country.  Unfortunately, because of his comments and the uproar, I don't think he stands a chance at unseating the incumbent and Obama underling, Claire McCaskill.

What it has done, is challenge the popular notion that abortion is okay in situations where the baby was conceived during a rape, even among many people who would otherwise believe that abortion is wrong.     It has brought the idea into the light that abortion kills a baby whose only crime was being conceived because of a crime. 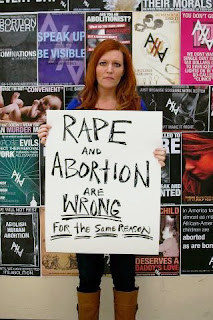 Some people may be aghast that I am saying that abortion is wrong even in the case of abortion saying that it is causing the rape victim to be victimized twice by having to carry the child to term and give birth to it.   By no means am I belittling rape and what the victim goes through.   Sex is supposed to be a beautiful act of love, selflessness and of giving and rape, instead is a horrible act of hate, selfishness and taking.   But, abortion is killing an innocent child.

Timothy Carney posted an interested article in the Washington Examiner titled, "When a Horrific Rape Leads to an Innocent Life" that highlights two young women and a child who were conceived because of rape.  Three women who would not be alive today if their mother's had not shown courage and kept their child.