The Lack of Reverence

I grew up in a small parish in Northwest Missouri.  St. Paul's the Apostle is a simple little brick church.  Simple wooden pews. A simple altar.  A crucifix.  A statue of Our Blessed Mother on the right of the sanctuary and a statue of St. Joseph on the left.   Around the nave there are simple pictures of the Stations of the Cross.  When I was growing up they didn't even have stained glass windows, although they do now.   But when you walked into the church there was a sense of reverence to the place.  The place could be packed for midnight mass(and by packed, I mean maybe 100 people?) but it was quiet.  You felt comfortable kneeling down in prayer. You felt the presence of God.  I think this sense of reverence is missing in a lot of larger churches.

I'm not sure how to get this sense of reverence back.   I think you should be able to walk into a church and feel like you are in a church--that you are in the presence of God and not feel like you are in a school auditorium waiting for the fall play to begin.   Maybe, in order to find a solution you need to look at possible causes so you can address them.

Which brings us to what I think a second reason for the loss of reverence, and one that I am guilty of.  People not acting reverent.    Now, I realize that I am listing one of the reasons that people don't act reverent is . . . people not acting reverent.  But, I think we affect each other.  If we go in someplace we tend to reflect how everyone else is acting.  If I'm chit chatting then you are more likely to chit chat.  If I don't genuflect towards the tabernacle then you are less likely to.  If I grab Jesus and run after communion, you are more likely to do the same. 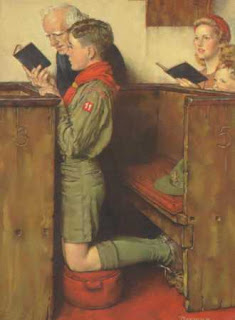 I believe my parish is a good example of design affecting how people act and I think the cause can go back to the beginning of the parish in the mid-80's.  When it was built, there was the main worship space, a small gathering area and offices down stairs.  Since there were no class rooms, it was designed with no pews.  Instead they had stackable chairs (with no kneelers)  that could be moved around between masses in order to makes small class room areas for Sunday school or whatever type of meeting they were having.  So I think people became accustomed to the worship space being a meeting space.

Since then, they've built classrooms, painted the ceiling sky blue, put in stained glass windows and now have a large crucifix.  The problem is, the parish has grown so big that they had to knock out the wall between the worship space and the gathering space so it is in essence a combination gathering space/worship space.  Have you ever tried praying by sitting down while people all around you are chit chatting about their week?

I'm am glad we stayed.  I love the people.  It is a great family parish and we are trying to build a new church that hopefully will remedy some of the aesthetic problems I'm talking about and bring about more reverence.In the mean time---I guess it begins with me.  I am, after all, the only person I can really control.  I guess I need to help by setting an example instead of talking with Bill.

What about you---does your parish have problems with people talking before mass or showing a lack of reverence?  Has your parish had this issue and what did they do to correct it?