Fred Phelps, the founder of the Westboro Baptist Church, passed away yesterday at the age of 84.  The Westboro Baptist Church made itself famous by never passing up the opportunity to protest something.   They protested everything from soldier's funerals to concerts to scenes of natural destruction.  And their protests spewed hatred while claiming that they were spreading the word of love.   Unfortunately, even in death, Fred Phelps continues to create hatred--this time towards him and his church.

My Facebook timeline and Twitter feed was abuzz yesterday after Phelps' death.  Most of what I read what the exact same type of hatred that the Westboro Baptist Church delivers.  If there is one thing that Phelps did it was unite people from the left and people from the right in their contempt towards the WBC.   I had people in the military saying, "I hope you rot in hell" and liberal friends who think that everyone should be free to believe what they want saying, "I'll piss on your grave." 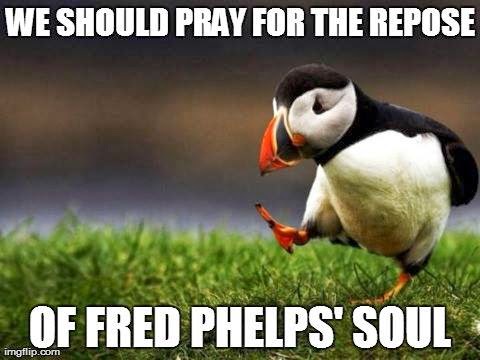 Reading all of this truly made me sad because I believe that instead of spreading the word of God they were aiding Satan in spreading hate and Satan loved every minute of it because that hatred was going back to the WBC.  The WBC claims God hates when the opposite is true.   God cannot hate because God IS love and when people hate they are separated from God---just what the Devil wants.

Everyone has been saying that Fred Phelps is an evil man.  Some even comparing him to Hitler or Stalin.   I'm pretty sure that he did not kill thousands of innocent but I cannot judge how evil he was because I cannot look into his heart and thus I cannot judge the man just like he couldn't just all of those that he claimed God hated.

I do know this though.   God loved him.   He was created in the image and likeness of God and God desired to have a relationship with him.   I know that Jesus died on the cross for him.  I know that God has called me to love just He loves me.   So, you'll excuse me if I don't hate Fred Phelps and instead, I pray that in the end he found peace with God and is on his way to Heaven instead of Hell.  You see----I won't let hate win in my heart.