Why is it that when people think of orthodox priests they think of grumpy old men who are joyless and don't want you to have any fun in life?  People tend to visualize some curmudgeon who will rather condemn you to eternal hell fire than crack a smile.    I'd like to challenge that stereotype and propose that conservative, orthodox priests are fun people who, although can be blunt, are happy, cheerful people.

Now, a little disclaimer, I have to admit that I really don't know a whole lot of priests.   I grew up Catholic but for most of the 1990's I was Catholic in name only.  It was a rare occurrence that I was in mass much less go to confession and never went to adoration.  So really--I was pretty typical.   And since my "reversion" in 1999, most of the priests I've gotten to know well have been via the internet.   But, the ones I've gotten to know well are ones that I would consider conservative or orthodox, although they may just claim to be "Catholic." 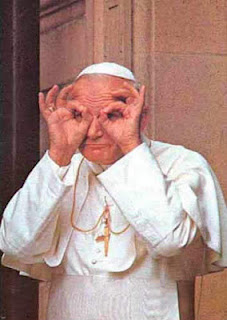 These are priests who I would like to spend time with.  They are priests that I could sit around and share a beer with while discussing theology or while talking baseball.  They are priests who unashamed of wearing the Roman collar.   There is a priest who works on a college campus who I've become good friends with.  We've gone to a St. Louis Cardinal game and he's counseled me through difficult times.   There is a priest I know from the blogosphere who enjoys bike riding and getting ready for the zombie apocalypse.  I wouldn't be surprised if he was carrying a Glock under his cassock.    When I go visit my mom, I enjoy it when she invites her parish priest over so we can sit and chat.

These are priests who live life to the fullest and enjoy every moment life.  They are men who struggle with trying to figure out what God wants but aren't afraid to trust in the church for guidance.  They are joyful because they allow God to work through them.  For instance, the priest of a nearby parish is uberconservative---he has gotten rid of extraordianry ministers for the most part and wants to put in alter rails---but I not only see Jesus in him but I feel the love of Jesus radiating from him.

I wonder if it's because they know they are leading souls to Heaven by being strict and by being honest instead of just telling people what they want to hear.   I enjoy the honesty.  I appreciate the example that the chains of sin can be broken.   I like the reminder that we all must strive for holiness and that we can still have fun in life while working striving to be like Jesus.