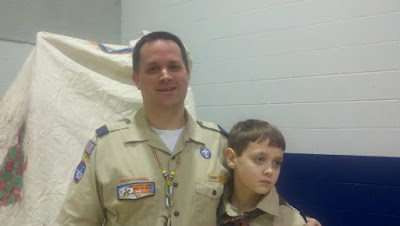 Last Friday night, my son Max--who is 11 years old--and I were supposed to go on a Boy Scout camp out. I, by no means, am an outdoorsman. But Max would much rather stay inside than go outside, especially when it's hot out. So, after much wailing and gnashing of teeth, I finally decided to leave him at home and went on the camp out as an adult leader.

I grew up in scouting. My grandfather was the town's Cubmaster for years so it was natural that I would join when I came of age. I went through the ranks. Earned my Arrow of Light and became a Boy Scout. Our troop was small but I went to Camp Geiger and was inducted into the tribe of Mic-O-Say and given that name "Little Black Parchment"---named after my grandpa who was "Black Parchment." I rose to the rank of Firebuilder in the tribe and have many memories of Geiger and Mic-O-Say. I went through the scouting ranks. I turned in my package for Eagle Scout before I left for Marine Corps boot camp. Sadly, my scoutmaster never turned it in and I never followed up so I did not get this prestigious award.

Several years ago, when Max started first grade, I signed him up Cub Scouts. I was then that I realized how much scouting had made me into the person I became. As a son of a single mom, scouting truly helped me become a man. I loved it! I couldn't wait to share the experiences with Max and foresaw him learning the same things that I did.

Max isn't your typical eleven year old boy though. Max is unique. Max has certain tendencies and can be socially awkward. Because of these tendencies and awkwardness, Max does not enjoy scouting. He doesn't like camping in the summer when it's hot outside. He doesn't get along with the other boys and he is just bored with it. I've tried to encourage him, bribe and and convince him that it's a way for him and I to spend time together.

Last Friday the situation reached a boiling point though and we butted heads. He refused to go. I forced him and we weren't even to the meeting place before I turned around and took him home, broken hearted. I'd been looking forward to spending time with him on this camp out with him and I've come to the conclusion that if I wish to stay involved in Boy Scouts as a leader it may have to be without him.

I love Max. He's my only boy. And I really wanted to share Boy Scouts with him and he's rejected it.

It's a difficult situation. Love calls for sacrifice. We don't always get what we want. Sometimes love hurts. Sacrificing what makes us happy in order to make someone we love happy can be brutally painful. This weekend, I felt like my heart had been pierced with a lance.

That's the time when we have to look towards Jesus as a model. He made the ultimate sacrifice. He suffered. He was physically tortured. He gave his life for us to show us the love He has for us. If you want a model of what love is, you only have to look at a crucifix.

So, I made a decision this weekend that I didn't want to make. I had to relent in order to show my love. I'm not trying to make myself look pious or make myself into a martyr. After all, many times the sacrifices we make for love go unnoticed. That's okay. We do it for love not for notoriety.