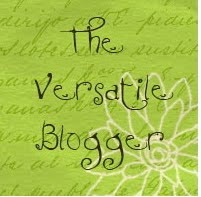 My baby sister (who happens to be pregnant with a baby) has her own blog over at From the Heart. Well, even though I'm a butt-head to her (aren't big brother supposed to do that?) she gave me a little Blog award. She game me "The Versatile Blogger Award."
The rules to this award are simple.
1. Thank the blogger who gave it to you: (Thank you, Margaret!)
2. List 7 things that people may not know about you:
3. Pass the love to 15 deserving bloggers (geeez---not sure I can find the award who haven't gotten it!)
4. And let them know you gave them an award. (this may have to wait until tomorrow--it may take research and I'm tired)
So the 7 things you may not know about the Roman Catholic Cop
1. I once got in-school suspension because I took a smoke bomb to school, gave it to someone, who three days later lit it in the boys bathroom.
2. I went to Saudi Arabia while I was in the Marine Reserves for Desert Shield/Storm where I got to spend my war time on guard duty and mess duty.
3. I ran for Student Body president and at the speech, instead of telling everyone all the great things I was going to do--such as more pop machines and stuff---ended up TRASHING my opponents. I didn't win.
4. For our honeymoon, Abby and I went to Reno, NV and stayed at a casino. I spent most of my time in the video game arcades instead of the casino.
5. I've met my father once in my adult life.
6. I got caught making out with a girl on a retreat at Conception Abbey by a priest. (That's why I'm suspicious of all the kids at youth events!!!
7. I enjoy good Broadway musicals--especially "South Pacific."
Now--for my seven favorite blogs. Some of these people may have already won it before but I don't care damm it!
Defend Us in Battle
Father Jim Chern's Blog
Feel My Love
In Him We Live and Move and Have Our Being
Musings of a Catholic Lady
Salvation is an Adventure
The Catholic Guy Show
Okay--seven--that's what I got. The others are the "big boys" who really don't need traffic driven to them.