CrossFit and Prayer is the Prescription 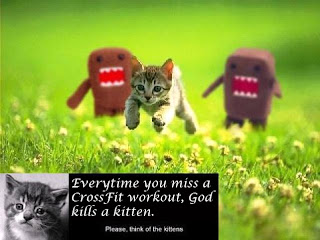 I do a horrible job at taking care of myself--both physically and spiritually. This isn't a new thing. I've been this way for all of my life. I don't really have anyone to blame for it except myself. I suppose that if I think about it, one of my major vices is sloth. Here I am, approaching middle age and finally starting to attempt to get over my laziness and treat my body and soul as God wants me to treat it.
I've never really been the physically active type of person. I would say that the only time that I've ever really been in shape is after Marine Corps boot camp and the police academy. Two places where I HAD to be physically active. But left to my own devices, I'd rather sit on the couch than go for a run. If I had a choice, I would rather get an extra value meal from McDonald's than to cook. Because of this, I am a physical mess. I'm overweight and out of shape. Which is sad because, I have a good foundation. I am relatively healthy. My heart isn't diseased as far as I can tell and I've never had any major injuries. I have no excuse for my physical condition except for the fact that I'm lazy.
As far as spiritually, there is no doubt I've abused my soul over the last four decades. I went nearly 30 years going to church sporadically at best. It's only been the last seven years ago that I could even say that that I was a weekly mass attendee. It was much easier to stay at home on the weekends than go to church. It was much easier to do what I wanted to instead of what God wanted me to do. Because of this, I am a spiritual mess. I'm a slave to sin, facing all types of temptations and seeming to fail more often than I succeed. Which is sad, because--like my physical body--my soul has a good foundation. Down deep, I am a good person. I know the right things to do. My soul just succumbs to the desires of the flesh causing me to sin instead of living a virtuous life.
I am happy to say that a year shy of turning forty, I have seen the light and think I'm turning the curve in my desires to become physically and spiritually fit.
I was asked to be part of the test group for CrossFit at the police department. For twelve weeks, myself and eleven other "ambassadors" would go to the academy and go through tortuous workouts. Week by week, I started to see improvements though. I could tell I was doing better on the workouts--able to run further and lift more weights. At the end of the program, I had lost weight and inches and transformed some weight to muscle. My clothes fit better and I felt better about myself. I'm eating better and I feel myself becoming healthier every week.
I've been working on my spirtual sense longer and I am seeing strides there also. Sunday mass isn't a chore but a necessity. Confession isn't a task and instead of dreading it I look forward to it. My prayer life still stinks, but I can tell when I've been saying my prayers regularly as opposed when I've gone awhile without. When I'm not praying regularly, tempations seem much stronger and it seems easier to sin. When I do pray regularly, the temptations aren't as strong and it's easier to live a virtuous life. I feel myself becoming closer and opening up to God bit by bit.
It's not easy and while I can see progress I'm still not happy with where I'm at. Yes, I've toned up and lost weight but I recognize that I'm still overweight and still have awhile to go in order to be physically fit. I realize that it's not going to be easy because the weights are only going to get heavier.
Yes, I'm attending the sacraments regularly and trying to pray regularly but I recognize that I'm still a slave to sin and still have awhile to go in order to be spirtually mature. I also realize that the closer I get to God the more Satan is going to attack me and the crosses are only going to get heavier.
I have a good support system in place though. I have some amazing CrossFit trainers there to encourage me, to push me along and offer me any assistance that I need. There are also amazing CrossFitters at the gym that sweat along with me and offer words as encouragement as they do the workout with me. I couldn't be where I am today without them. I also have amazing spiritual "trainers" such as my spiritual director, my parish priest and others to offer me guidance. I have the sacraments to give me God's grace. I have other Christians who are going through the same things I am, lifting me up and encouraging me along.
It's good to know how far we've come and to know how far we have to go. I know I've made grounds physically as well as spiritually. I also know I have a ways to go. Now, I have to get off my butt and do it.